ACCESS : Readily access with care from Ferrydyke footbridge across the Forth and Clyde Canal from Port Patrick Road in Old Kilpatrick. The platform is unsafe.

All that you see of Donald's Quay itself today is a concrete wall against the Clyde, but this simple navigation light is still standing there.

Donald's Quay was once the location of the northern terminus of the Erskine Ferry then run by Lord Blantyre of Erskine House that provided foot passengers with a crossing of the River Clyde, giving direct access between Dunbartonshire and Renfrewshire. At some point in the early 19th century the northern terminus of the Erskine Ferry moved to a site closer to Old Kilpatrick and opposite the Ferry House at Erskine, before closure in 1971 when the Erskine Bridge was completed.[1] Donald's Quay once had an approximately 170-foot-long (52-metre) stone pier that was used by coal boats that transferred their loads into canal barges on the Forth & Clyde Canal at Ferrydyke Wharf and thereby avoided paying fees at the Bowling Basin. The quay was demolished during the construction of the Lanarkshire and Dumbartonshire Railway in 1896. 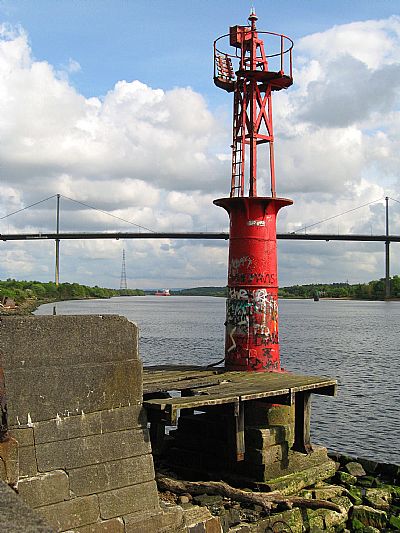 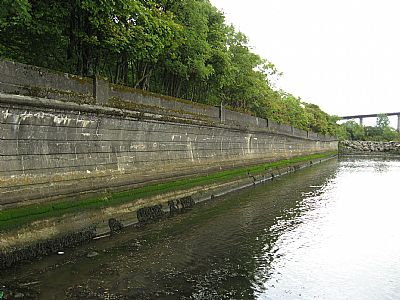 The quay wall with the Erskine Bridge beyond. 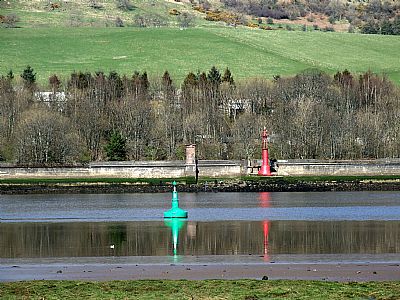 The quay and light as seen from across the Clyde.

To us today it is more a vantage point close to the Clyde from which to observe the ocassional passing ship, but there is much more to it. Wiki gives a comprehensive account.

There is another consideration while you are here. The Antonine Wall ran against the west edge of the Roman Kilpatrick Fort and right up to the Clyde Shore. Right here. With the Romans using sea and river craft, did they also have a landing point here. perhaps a quay or jetty of some kind? To get a good impression of how the Antonine Wall ran up to the Clyde and then subsequent development ran the Forth and Clyde Canal right through it with Donald's Quay following, look at PastMap and put in the Easting/Northing coordinates : 245869, 672998. You will see layers of intersecting history of different eras all at one point.