ACCESS : Partially open to the public during events and fully during Doors Open Days.

Some very interesting features in it, such as the red sandstonecarvings, attract our attention on approaching. On entering, its Arts and Craft design is even more evident.

The building was designed by architect John Archibald Campbell and dated 1888. The building was built as the Ewing Gilmour Institute for Working Girls. When completed it was presented to the Scots Girls' Friendly Society to manage. Nearby is the Alexandria Library, once the institute built to foster the "mental recreation and moral improvement" of the youth of the Vale of Leven. It is evident that these two buildings had something in common in their objectivess. Both were sponsored by William Ewing Gilmour, a noted Vale benefactor who was a director of the United Turkey Red Company (UTR).

It is shown as the Institute for Girls on early Ordnance Survey maps at least until the c.1915 edition; thereafter as the Masonic Hall. 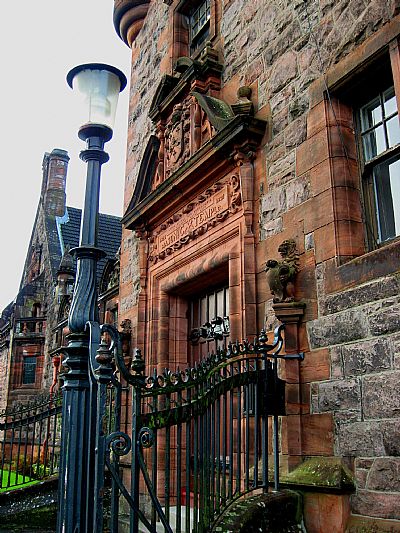 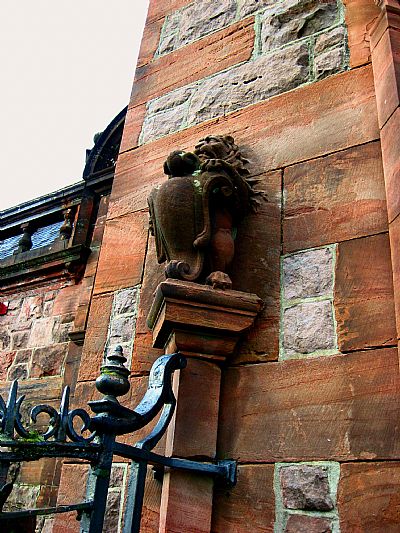 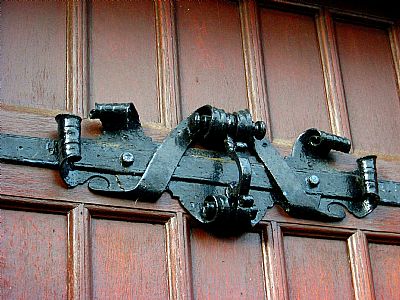 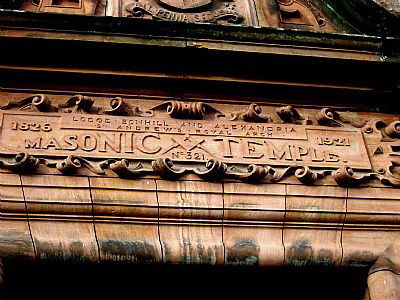 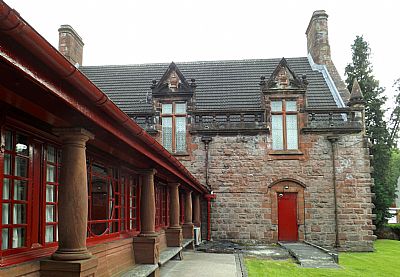 The north gallery facing the rear is seen here from the exterior above and the interior below. It is well lit with natural light. 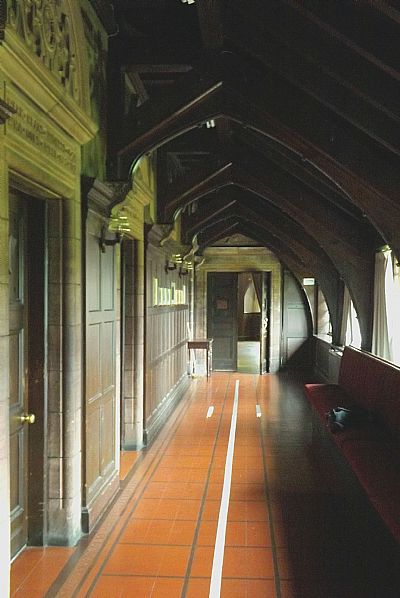 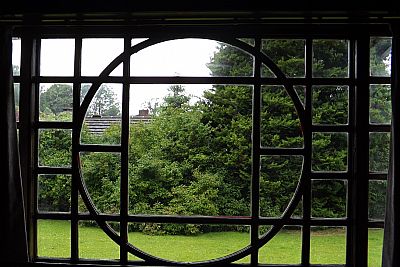 There is an almost Japanese feel along the rear gallery, both in these windoes and the red exterior woodwork. 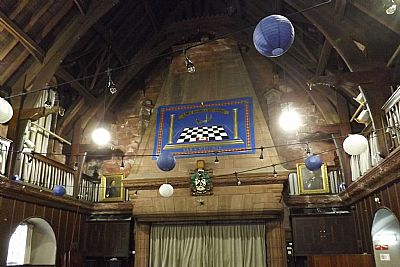 The main hall is very obviously a Masonic meeting space shown by the emblems and art work. But you may also find some decorations indicating its use for other events such as community social gatherings and weddings. 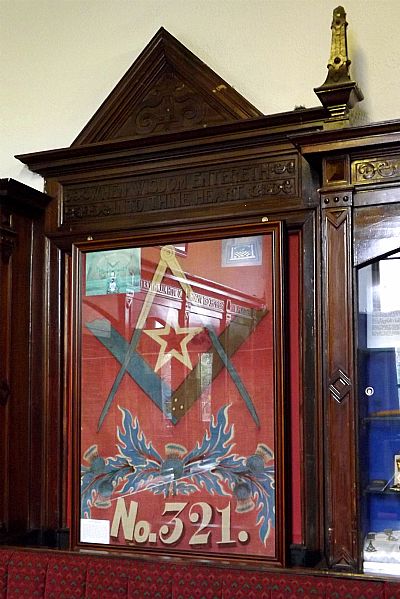 The library has some displays of Masonic items. 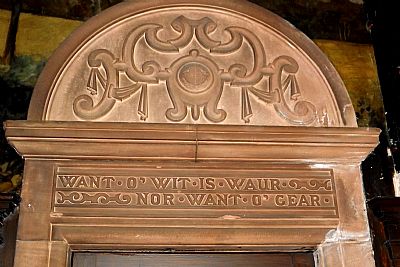 [Proverb: "Lack of wit is worse than lack of smell" - any other suggestions?] 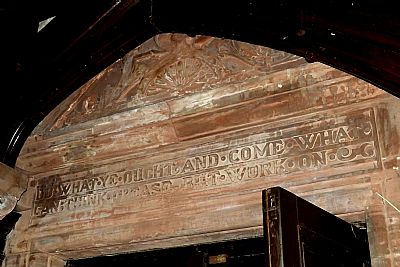 DO WHAT YE OUGHT AND COME WHAT CAN; THINK O' EASE BUT WORK ON 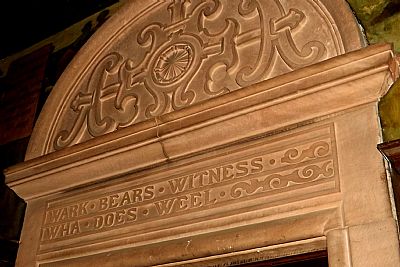 WARK BEARS WITNESS WHAT DOES WEEL 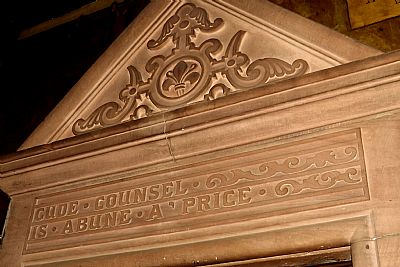 GUDE COUNSEL IS ABUNE A' PRICE

[Proverb : Good advice is above price]

The mural in the hall is by Harrington Mann, one of the Glasgow Boys. Similarly, and presumably also by him, are friezes along the rear corridor or gallery lit by natural light from the rather Japanese looking windows. They each have poetic quotations and you will see such quotes also appearing in the stonework so that the building becomes something of architecture and art that can be literally read; itself a moral message. These colourful works are canvases set integral over the stone walls. A small brass plaque above the hearth notes that the artist having painted the picture in 1891 and that it was restored on behalf of the Loge in 1936. 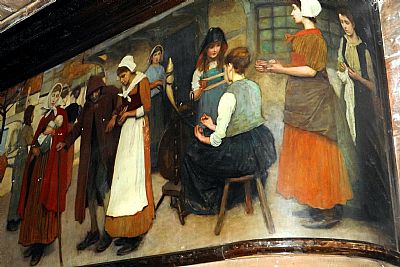 This mural wraps itself around the hearth in the main hall. 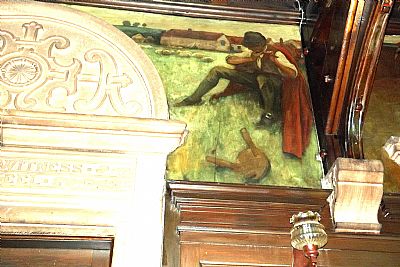 The frieze murals are between the elaborate door surrounds. The themes may be alagorical. Why is there an uoturned milk maid's stoll next to a nonchalant flute player? A warning to young women about losing their hearts? 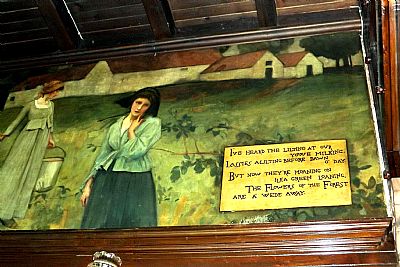 THE FLOWERS OF THE FOREST ARE A' WEDE AWAY

[Probably from Jean Elliot's Flowers of the Forest, a much revised traditional song] 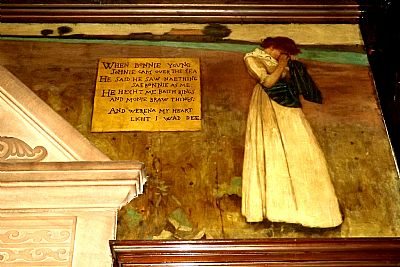 WHEN BONNIE YOVG JOHNIE CAM OVER THE SEA

HE SAID HE SAW NAETHING SAE BONNIE AS ME :

HE HECHT ME BAITH RINGS AND MONIE BRAW THINGS :

AND WARENA MY HEART LICHT I WAD DEE

[This is from Were na my heart licht, by Lady Grizel Baillie] 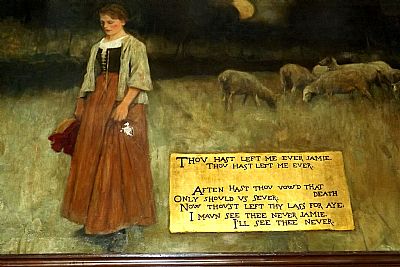 THOV HAIT LEFT ME EVER JAMIE

THOV HAST LEFT ME EVER.

AFTEN HAS THOV VOW'D THAT DEATH

ONLY SHOULD VS SEVER,

[From Jean Redpath's Thou Hast Left Me Ever, Jamie] 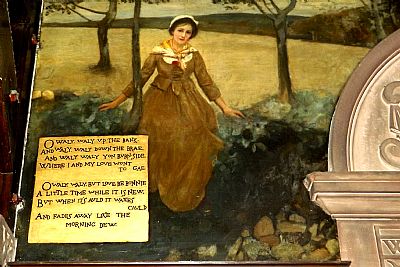 O WALY WALY UP THE BANK

AND WALY WALY DOWN THE BRAE

AND WALY WALY YON BURN SIDE

WHERE I AND MY LOVE WONT TO GAE

A LITTLE TIME WHILE IT IS NEW

BVT WHEN IT'S AULD IT WAXES CAULD 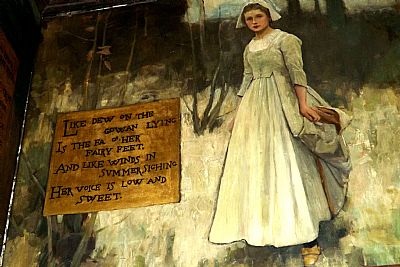 IS THE FA O' HER FAIRY FEET.

HER VOICE IS LOW AND SWEET 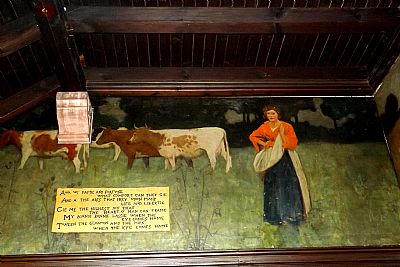 WHAT COMFORT CAN THEY GIE

AND A THE ARTS THAT PREY VPON MAN'S LIFE AND LIBERTIE

MY BONNIE BONIE LASSIE WHEN THE KYE COMES HAME

TWEEN THE GLOAMIN AND THE MIRK

WHEN THE KYE COMES HAME

These are all songs written or adapted from traditional songs as noted. And very suitable to inspire and guide young women of the time.

There are some stained glass window. The two in the main hall have mysterious connotations. 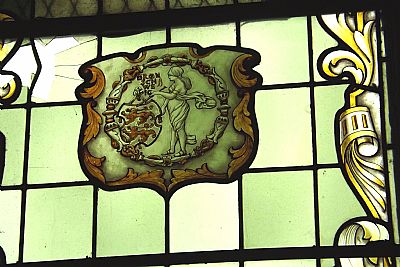 This one depicts a woman with a double lion shield. The text is BRONSWEIG which seems Germanic. Instead definitions.net says it refers to the numerical value of 6 in Chaldean and Pythagorean numerology. 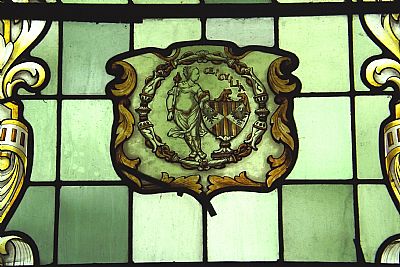 The window on the other side has a woman with a shield with two ravens (?) and the word CECYLIA. The web tells us it is a girl's name and means "blind" or "sixth".

So what is the reference to six or sixth about? In numerology, the figure "6" signifies a loving and caring nature. It is also associated with motherhood  and fatherhood, sacrifice, healing, protecting, and teaching others. No family or community can function without the attention of the 6 – it is the glue that keeps a family and community together. While such values would be clearly encouraged in the young women being nutured here, such references must have seemed rather remote and obscure to them. 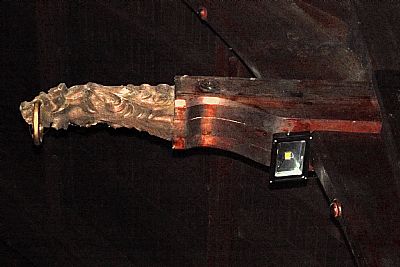 Visitors are shown the magnificent hall and the panelled library now forming the lodge's display area and bar. Look out for the architect's lovely sketch of the design. Somehow a small aeroplane has crept in there amongst the clouds pre-empting powered flight by many years. (Or was it added later?).

The kitchen, now looking rather spartan and utilitarian, still retains most of its original tiles. 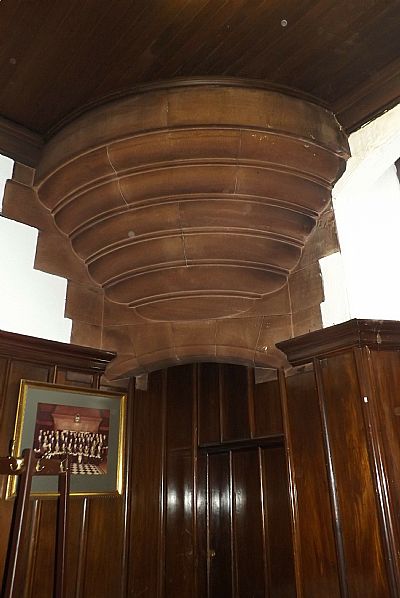 This bold corbelled feature in the library hints at the spiral staircase to the attic level. This gives a secret away. The girls were accommodated in an attic dormatory.

To fully appreciate the significance of this building and those girls and their benefactor, you need to also have some idea of the culture of this time, the class differences within the nearby textile industries and many other aspects of the local environment.

"Mention of associated works at Drymen : A feu has just been taken off at Drymen, N.B. for the erection of a Cottage Holiday Home for the Scottish Girls Friendly Society. This home is to be built by Mr and Mrs William Ewing Gilmour, in memory of their deceased eldest daughter, and will be named, "The Jessie Campbell Gilmour Cottage Holiday Home." The building will cost about £3,000." [Building News 14 January 1898 p60]

As for its current use as the Masonic Lodge : well they have their own story which you can find in the Grand Lodge website linked to below. It involves the swiftly flowing River Leven and problems of getting across it in the early days by members from Bonhill and the establishment of a lodge on that side. Opportunities opened up with the Lodge eventually moving into this building. The rest is history.