ACCESS : You can go here, but you will not find it.

///gained.claims.tribe Roughly the epicentre of where the lagoon once was.

The forms of our towns, particularly old ones, are not laid out as randomly as probably suspected. Many criteria influence them. Today foremost amongts these is likely to be long determined property boundary lines and ownership. Next in terms of influence are natural features. Both natural features and property boundaries can of course be altered.

Dumbarton evolved over time at the foot of the ancient stronghold of Dumbarton Rock. When in its fledgling days of scattered cottages, this was little more than mutual agreement with ones neighbours, a nod from the overlord and assurance that the foundations were firm and not subject to rising water.

As the town grew the firmer land a little further upstream was the chosen spot to build on and that in turn took on an organic form hemmed in by the Leven and the marshy areas north and south. The River Leven was its lifeblood in terms of transport, but those marshes were also a hindrance - unless utilised for beaching boats or building them and then launching them. That is what the area closest to the Rock got used for and as that industry developed the marshes got dredged or infilled as a system of quays, slipways and basins.

But that was just the marshy area closest to the Rock.

On the other side of the town upstream was another extensive marsh. This was tidal - flooded at high tide and exposed mud at low tide, river grasses covering what was not naturally channelled.

When the railway came through Dumbarton, the edge of the lagoon became fomalised with embankments, but the remainder stayed rather wild for quite some time. This was midge territory. Unwanted. Poorly, if at all, utilised. The land closest to it was problematic although that adjacent to it could be used for grazing. It became known as the "meadow".

Irving records that £1000 was given to the burgh as compensation for crossing the meadow with the stipulation that this be used for embanking and draining it. Even with further funding acrued through interest, this fell short of that required and Parliament was petitioned for more.

During the works, workmen discovered heavy oak beams near the Strathleven Estate, which appeared to have been an earlier embankment, perhaps from the sixteenth century.

In the map of 1860 the lagoon appears much reduced from what we see in the earlier one of 1818, but the embankment along the northern edge of Dumbarton is much the same. A little industry is squeezed in betwen the raised railway embankment, even higher than the waters edge embankment. Dumbarton Station at this stage is just a very small building and paltform.

The lagoon and its marshes have long since been completely filled in. The "meadow" was extended across the infilled area and subsequently most was built over, but its past remains in the name "Broadmeadow Industrial Estate" west of Overburn Avenue. To the east of that and across Townend Road there are sports facilities and lawns. The curve of Meadow Road demarcates the eastern extent of the meadow. It may have been a meadow, but only because it took a long time for the infilling of the lagoon to reach a state suitable for alternative use. 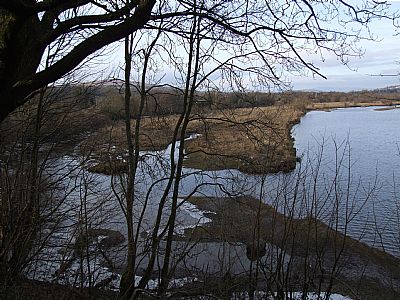 This is a view of the River Leven upstream of the A82 bridge, but it gives us a clue as to what the lower stretches of the river looked like too. The River Leven above this point is very fast flowing, but as it widens it spreads out and slows down and silt and vegetation are found. 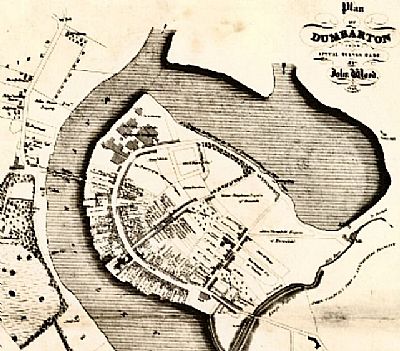 This map by John Wood was printed in 1818. The town of Dumbarton is encircled by water for much of its roughly circular form. The river itself runs in from the watercourse to the top left.

By 1860 the lagoon is still there, but a more formalised drainage ditch can be seen across the "meadow" to the north and the edge nearest the town has an embankment and the overall extent of the wetlands is much reduced. Light industry now occupies most of the infilled area immediately north of the station, now called Broadmeadow Industrial Estate, with lawns and the "Meadow Leisure Centre" where it was infilled to the right.