NOTE : This works became merged with the Croftengea Works immediately downstream and that in turn became known as the Alexandria Works. The lade identified here becomes common to that too.

ACCESS : The inflow of the lade is at the point that the towpath and roadway near the baotclubs and barrage merge. The lade can be followed with varying degrees of direct access for its length until it reaches the current distillery.

///engineers.tuned.degree The lade inflow marked A on the map.

///flank.growth.joins The lade where it reaches the distillery and marked B on the map.

This works had a long lade, either in order to get the best flow from the bend in the Leven further up or with ambitions for expansion. That lade now goes under Loch Lomond Distillery. Note that the distillery is large and this is at one end while Croftengea Works was at the other. 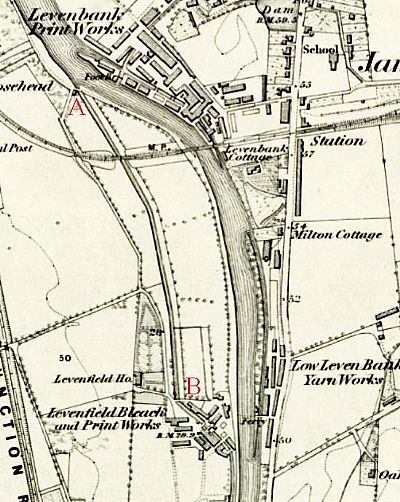 The lade comes in at A and exits at B. The tow path passes over the incoming lade at A where a combination of control sluice and grating can be seen. It then leads down to and under Strone Road in the current industrial area and up to what is now the Loch Lomond Distillery. You can make out where it then continued through these works and on parallel to the Leven to the Croftengea Works. 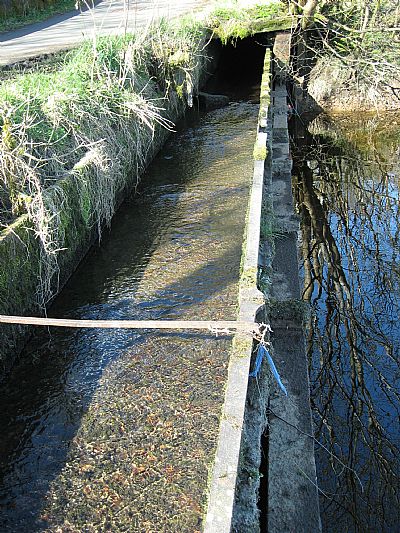 The lade begins here. Water from the Leven passes under this iron culvert. The culvert is constantly flowing with ground drainage water from the area a little further westwards. It appears that this dual system was intended to separate the clean Leven water from the often soiled ground water. The latter then joins the Leven flow anyway just across from this point. Under the culvert and the towpath are stone vaulted support arches. 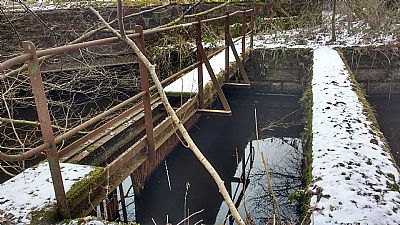 Close to the towpath is this double structure which appears to have been to control the flow into the lade. 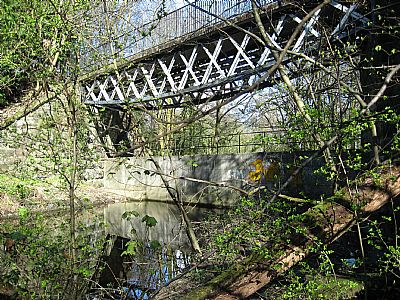 This bridge over the lade is the pair with the Stuckie Bridge over the Leven - both part of an unrelated rail link. Below the bridge is a modern concrete barrier to stop water flow. Although there are some small outlets at the base, the flow is now effectively zero. And this creates a challenge. It is a lade without a beginning or an end. It has gone completely stagnant. 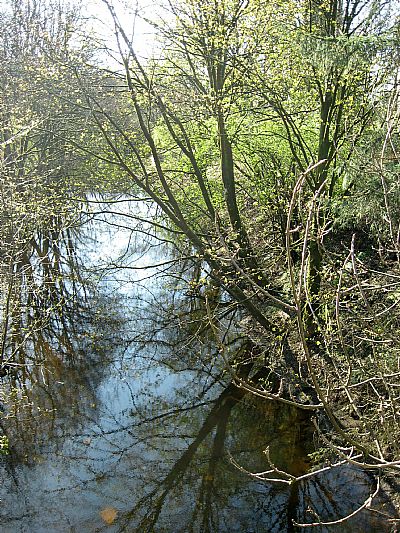 The lade is now quite overgrown. 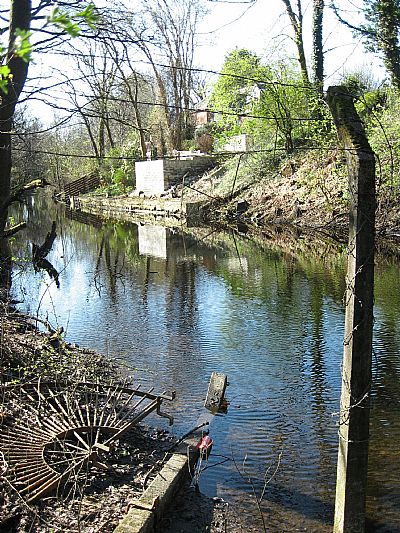 A few houses back onto the lade. A vew of the water is marred by neglect, misuse and lack of resolution of its flow or at least water quality. A planning opportunity that has been missed. There is so little left of our once amazing textile industry. The lades are one such feature. Other than a short remaining section at Dalquhurn, this is the most significant feature.