To consider this barrage, we need to see the bigger picture. And that is not as obvious as at first perceived.

The River Leven is fed from Loch Lomond and some small tributaries. That flow can be excessive after heavy rains with perhaps meltwaters from the hills beyond adding to it. The banks of the Leven overflow way down stream in Dumbarton on a regular basis. At that point the river is tidal and spring tides can exacerbate the levels as can heavy rains way up towards the source of the Clyde. The Leven used to have natural marshes at both below Dumbarton Rock (which was built up for shipbuilding and later infilled for the football stadium) and at the Meadow Industrial area (which was infilled for light industry). Both of these would allow for a degree of absorption of the full impact of flood waters.

One would expect the barrage to bring the impact of flooding downstream under a reasonable level.

It is worth considering regular bursting of the banks of the Leven in Dumbarton and also ocassional flooding upstream and even the banks of Loch Lomond itself. This flood control role of the barrage is what comes to mind. But is it quite what it is perceived?

A look at definitions shows that a barrage can be an artificial barrier across a river or estuary to prevent flooding, aid irrigation or navigation, or to generate electricity by tidal power. [Wiki]. Another definition is an artificial obstruction, such as a dam or irrigation channel, built in a watercourse to increase its depth or to divert its flow.  [The Free Dictionary]. Now that one gives us the clue we need.

This barrage is not here just to prevent flooding, but to also retain the volume of water behind it at a certain level.

The River Leven used to be navigable along its whole length, at least seasonally. In drier seasons it may still flow briskly, but it narrows down to a fraction of its width. Above the barrage a steady depth is retained throughout the year that is well appreciated by an ever busier marina; a boon for recreation and tourism. That may be a great benefit, but it is not the main or only purpose of the barrage either.

The barrage is but part of a wider project which utilises Loch Lomond as a water supply for the district. There is a pumping station near Ross Priory at a point less disturbed by boating.

The Central Water Development Board was given permission to draw off 455 megalitres (100 million gallons) of water per day. To do this without adversely affecting the waterlevel of the Loch or River Leven, a means was required to control it. The level of the loch must not fall below 6.7 m (22 ft) OD" (in accordance with the Loch Lomond Water Board Order 1966). The draw off point must be constantly at a depth that ensures both flow and water quality. That draw off point is some miles away near Ross Priory.

So while you may notice fluctuations in the level of Loch Lomond it is never excessively low. It does have a mitigating effect on levels downstream too, but that is only part of its role.

Seven large bottom hinged gates are raised or dropped according to conditions. The scheme was opened in 1971.

This naturally affected fish migration, depending on their spawning season, relative to when and how long for the gates were dropped. The Loch Lomond Angling Improvement Association website mentions long term concerns about spawning being detrimentatlly affected. After a great many years of negotiation improved seasonal minimum flow control became realised, which was expected to greatly improve fish stocks and to encourage fish into the river throughout the spring.

An associated scheme in 2004 improved the storm water drainage through Fishers Wood which spreads out just behind the barrage on the west bank. 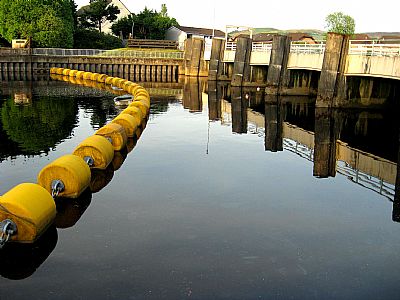 The upstream side of the barrage. A row of heavy bouys act as protection against boats being swept down through the barrage.

In this photo taken from the seaplane, you can see Ross Priory almost hidden by trees to the left; its boatclub with its slipway and other structures more visible. To the right is the Intake and Pumping Station.

SEPA : Flood Hazard and Risk Information. Select coastal or river flood risk information and put in your postcode to see the risk in your own area :  https://map.sepa.org.uk/floodmaps/FloodRisk/Risk