ACCESS : The lower point of Poachy Glen can be accessed on foot from its upper point on Carman Muir. (The lower end above Renton has been blocked off). This glen is a small gorge with steep sides. Great care is needed. Not suitable for everyone. Do not go after heavy rains.

///fishnet.fanfare.variously The top end of the glen.

///contoured.wishing.digress Point to see the waterfall from.

This is a narrow, but picturesque area. Although relatively small, it is deep and its sides are steep; the result of ancient erosion that has created shapes through the sandstone. Tall mature trees compete with young upstart saplings such as oak and ash. The lower growth is very diverse. All this comes to an abrupt edge on each side where it reaches farmland.

It is inadvisable to try to enter the gorge along its sides as they are very steep and slippery or edged with precipices. But the upper end is relatively easy. Where possible you can walk on the burn's bed, if the water level allows you. Otherwise you will need to find a track higher up. Watch that edge! Note that to transverse the length you should be walking part at the lower level and part on a higher path. There are places from which to move from one to the other.

Along the way you may notice a strange hollow in the sandstone; a sort of carved shelf. There are theories as to what this is. The following is a possible explanation:

On summer evenings Andrew (the small boy) would seat himself near the old worthies of the then small village of Renton who used to range themselves on the seat round the oak tree which stood in front of the Old Tree tavern. He would listen to their anecdotes and reminiscences of tales of smugglers and illicit stills in the Poachy Glen. [Taken from the Short Story by Brother John Agnew Past Secretary Lodge Leven St John. See link below]. Has this "shelf" something to do with an illicit still?

You can find a variety of birds and perhaps ocassional deer wandering through. 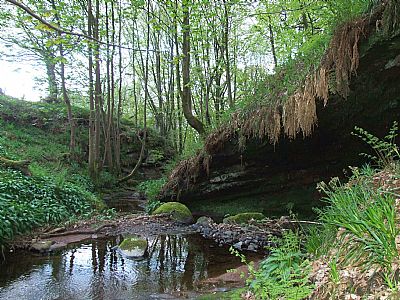 Picturesque from the level of the burn. The overhang though illustrates the dangerous pitfalls that are not obvious from above. When walking on the higher level, stay well clear of the edge. 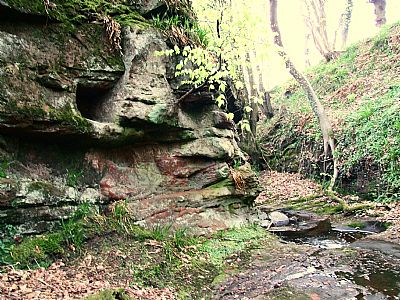 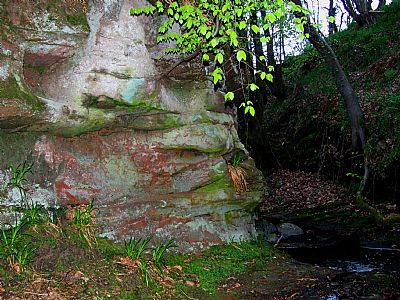 These two photos show what appears to be a man-made shelf in the rockface. 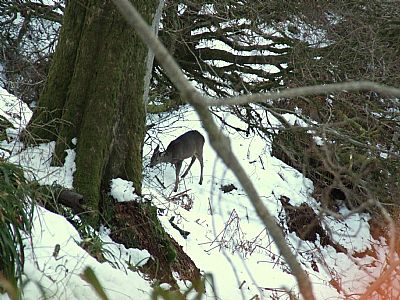 One of a small group of roe deer.

Although part of the bottom end of the glen, the following is suggested as a completely separate sortie. The burn flows down under the A82 (a very difficult place to walk anyway) and on towards Renton in a channel and pipe. Unfortunately the connecting route of this end is now blocked so cannot be walked, but there is something to see - with difficulty if approached from Renton. From the burn tips over a rock outcrop, persumably man-made and quarried, as a waterfall. Unfortunately this is within a fenced area and rather derelict, but there have been suggestions about what can be done about that. A peek through the security fence gives you a glimplse of the waterfall which can be quite impressive after rains.

To get there : There is a formal path that skirts around the back of the engineering depot alongside St Martin's Church all the way to Hillside Avenue and Turnbull Avenue. Parts of it are very muddy, particularly as it passes below the railway line. 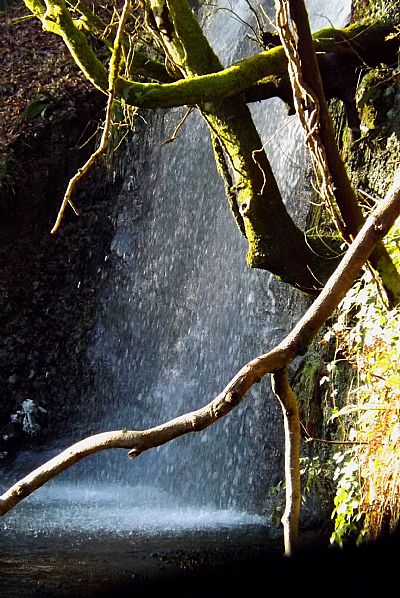 This is a view through the fence.