ACCESS : You can drive along Merkins Road and stop at the side (not in the passing place nor at the farm entrance gate). From there you walk up a dirt road for some distance until almost at the forest plantation.

Modern farm buildings have been built nearby and the field is used for cattle. Caution is advised.

This is a grouping of a well-preserved chambered long cairn of the Clyde Group and a round cairn. They are very close to the waterfall described in the next section and are just off the John Muir Way.

The long cairn is trapezoidal on plan and measures about 60m in length.  A chambered cairn is a burial monument, usually constructed during the Neolithic period, consisting of a sizeable (usually stone) chamber around and over which a cairn of stones was constructed. Some chambered cairns are also passage-graves. 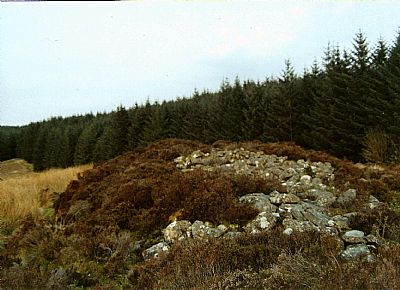 To get there it is suggested that you have a close look at the map in the GetOutside website below. It may be close to Croftamie, but is not easy to find. Strangely you may be within West Dunbartonshire when you leave your car, but are almost immediately in the Stirling.

Alongside the path is a single standing stone. Is this from the same era or a later land demarcation? It has had a bench mark scratched into it. 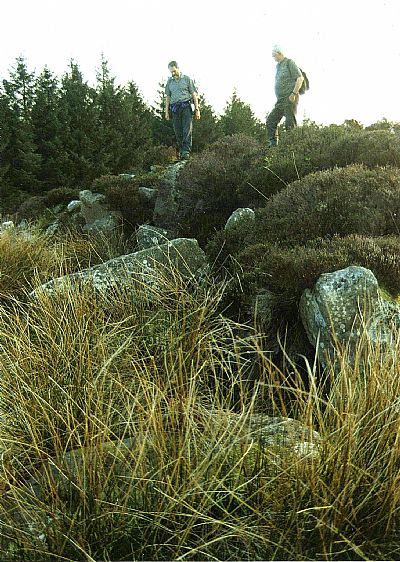 The John Muir Way passes close to this cairn on the walk from Milngavie to Balloch. See the plotaroute,com link below.

PLOT A ROUTE.COM : https://www.plotaroute.com/route/1052635 This link shows the section of route along the John Muir Way from Milngavie to Balloch.