What is now Clipper was built as the offices for the Macmillan Shipyard which was situated immediately to the east. It later became the offices of Hiram Walker, the Canadian distiller taken over by Allied Distillers in 1988. It subsequently became a rather unhappy, badly altered classical building (witness the concrete attic storey); after a vacant period. Then it became the offices of the Procurator Fiscal and more recently a public house. [Dumbarton Heritage Trail].

Its immediate neighbour, the small Elephant and Castle pub may have gone, but it has gained some prominence at this end of the High Street and acts as the pivot point for the walking route through the new housing to the DUMBARTON WATERFRONT PATH. To the other side is the BRITISH LINEN BANK building, now the Counting House. (Both path and bank are discussed separately).

Dumbarton's High Street expresses its medieval origins widening in the centre to accommodate the market area. The curve in the road reflects the curve of the Leven. Urban design did not exist then as a forward planning strategy, but some very significant decisions were made to create vistas and notable endpoints. The nearby Riverside Parish Church forms the strong punctuation point for this road; the Bell Centre spire the other. The form and scale of the High Street as an urban space are defined by the nature of its buildings on each side between these punctuation points. The town has evolved and continues to evolve. As one or more buildings disappear and are not sensitively replaced or nor replaced at all, that ambience is damaged. This building and the nearby Linen Bank building strongly define this side to the High Street, albeit somewhat aloof.

This is recognised by West Dunbartonshire Council who commissioned a study of the whole area. The result is the designation of the Dumbarton Town Centre Conservation Arrea. 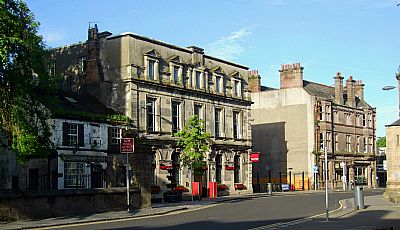 These photos taken before the Elephant and Castle was removed show how the streetscape worked. There was already by this time a gap between the McMillan Office building (Clipper) and the British Linen Bank building. 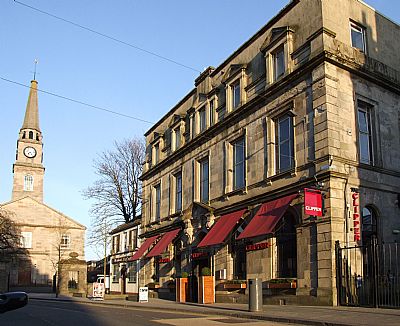 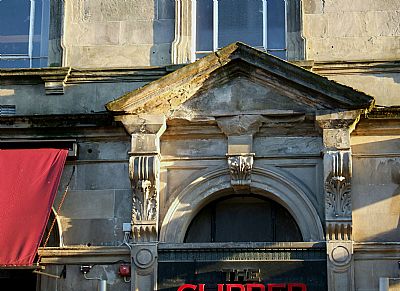