Tucked in behind the Sheriff Court building are the remains of a stone building. They may not look very much today, but they have an important part in Dumbarton's history. These are the stone walls of the Dumbarton Old Prison. it was somewhat larger with parts demolished for the widening of Glasgow Road and the extension of the court building. The small remaining access road alongside the court building is Maclean Place, but it should be approached on foot, if necessary using the nearby carparks.

The Tolbooth which stood in the High Street, served as an administrative centre and also a prison. There were stocks outside the raised main entrance. That function was to be relocated here.

This jail was designed by the architects James Gillespie & Robert Scott with the foundation stone being laid in 1824.

When it was demolished in 1973, only the gateway and some stone fragments were retained. Some sections were built into the enclosing new rubble walls. The gateway was built of polished ashlar. It remains in original position with a replacement iron-studded oak door recessed within a round-headed opening. The frieze and cornice have the Dumbarton Burgh arms. (Inside now is an electrical substation).

Canmore tells us that the foundations of the early 19th-century Napoleonic prison, demolished in 1973, and associated ancillary structures and landscape features were located between September and December 2001 under compacted demolition rubble. Underlying the early 19th-century structures was a horticultural soil, no more than 0.2m deep, which contained pottery ranging from the 14th to the 17th century. The land was apparently used as open ground, perhaps an orchard, prior to the construction of the Court House and Prison. [Canmore]. 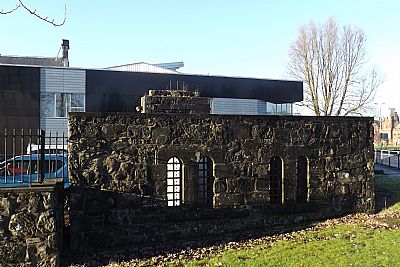 The walls have been partially rebuilt and integrated into hard landscaping. That is the modern extension of the court building behind it. 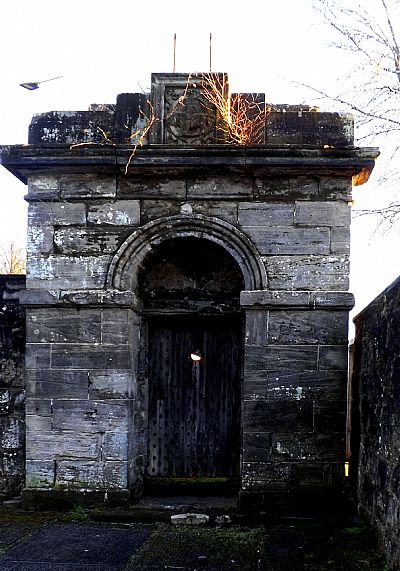 The gateway is largely intact. The "replica" doors now hide an electrical substation. 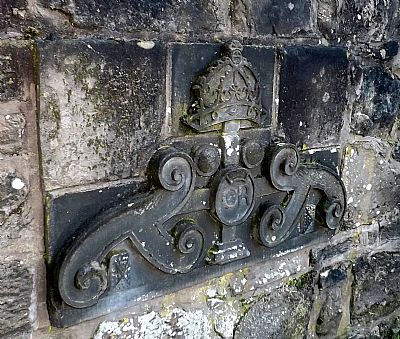 This emblematic carving now sits at low level on the side wall. 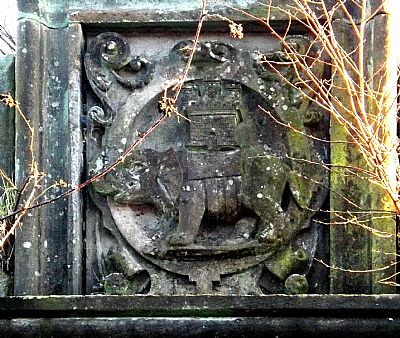 This crest is above the doorway and has the burgh elephant and castle.