ACCESS : There are few signs left of this industry that once dominated the Vale. In spite of that the route along the Leven towpath can be easily walked or cycled.

In the sections following this one you will see where to look for the various works sites. These are laid out in order from north to south and numbered. 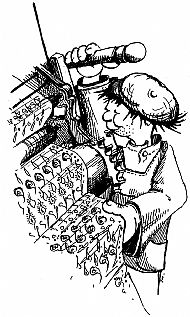 Before we get too far into this topic, we need to first clarify something. "TURKEY RED" may be how most locals think of the sprawling textile industry along the Vale. But as you will see below, that may have become a rather globular all encompassing term. In reality, the Turkey Red dying process was not used by all of these textile works and so the term should not be applied to all of it. The term though has become a useful, if lazy way of referring to all the textile industries here. But then everyone knows what you are getting at and I have been lazy too and use it in the title of this section.

When you pass through the length of the Vale of Leven, it can be difficult to imagine it linked by intensive industry, the smells, fumes, noises and bleach fields. In its heyday this was a string of textile related industries, initially mostly competitors, a few complementing others in various processes, those that survived ultimately cooperating.

The River Leven was one of the world's leading producers of bleached, dyed and printed cloth, rivalled only by Lancashire in the British Isles. Its strong point was that it had a ready source of pristine water from the Leven running out of Loch Lomond. These industries could tap into sources of the material from the Empire, process it and then market it across the United Kingdom or back into the Empire. That strong point though eventually proved to be its weakness. It concentrated on the finishing processes and would buy in ready-woven flax or cotton. There were similar works elsewhere in the UK, but that here was able to hold its own.

The first bleach field was at Dalquhurn, set up by Andrew Johnstone in 1715 with the help of subsidies available for the improvement of Scottish manufacturing and trade after the Treaty of Union of 1707.

Flax was spun into thread and woven into linen and later cotton fibres were similarly spun and woven to form cotton. The resulting cloth was woven in Lanarkshire mills and arrived at the Dalquhurn works in an unwashed and unbleached state. [WDC].

The story covers over 250 years. It was what created the urbanisation of the Vale and supported the communities that became the villages that eventually merged into a conurbation that we still know today. Yet that original industry has now faded. You can still see signs of it, but you need to know how and where to look There are still stone walls along the Leven and there are still areas that had been bleach fields that have not quite been rid of their startling chemicals. The lades that led water in and drained it out are nearly all there. But there is little else of the buildings that once housed the works and workers who struggled on in what we now consider horrific conditions of poor wages in often dangerous working conditions; dangerous because of the chemicals and the machinery.

They were truly exploited, but society was changing. A greater sense of social responsibility could be seen emerging amongst the key employers. People such as Stirling and Ewing.

A school was set up at the DALMONACH works and institutes for the improvement of men and women known then as The Gilmour Institute for Men and The Ewing Gilmour Institute for Working Girls were established. These are known respectively today as the ALEXANDRIA LIBRARY and the MASONIC LODGE. (Discussed separately).

As the history of the textile industry in the Vale of Leven is so broad, it is recommended that you read it up on such websites as that of the West Dunbartonshire Council (see link below). And to fully appreciate how it was spread across much of the length of the Vale of Leven, it is recommended that you walk at least part of the route. That is easily accessed as it strung out along the River Leven and the tow path (on the west side) provides the thread through it all. There are useful information boards installed by the Council with other relevant local information provided by Sustrans.

The Vale of Leven Heritage Trail brochure has been printed by the Council. If you cannot find a hard copy, it can be downloaded from the Council website. See below for a link.

We refer to the combined textile industries as Turkey Red after the best known and popular red dye of the time. This came from the Rubia plant. The plant is commonly called madder with the result *turkey red". This name is useful as one, even if not always accurate through time, that we use today to refer to all the textile works across the Vale and comes from the popular and most successful dye. The United Turkey Red Company (UTR) was formed in 1897 uniting William Stirling, Alexander Reid and the two Orr Ewing brothers. 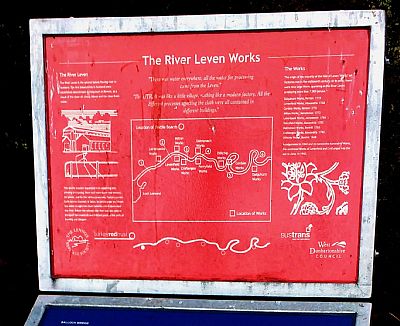 Along the Leven towpath you will find information boards. The blue section gives general and historical information and were reinstalled by Sustrans. The red section erected by the council relates to the Turkey Red textile industry.

We can plot 11 of the sites today, but there were actually even more. We may know their approximate location, but any accuracy is now lost. These include :

The following sections cover each works site individually. They are laid out, not alphabetical, but as they appear on a map from north to south, in other words, from upstream all the way downstream. Although the meanderings of the Leven may mean that this is not always literal, the sites have been indicated as east or west depending on which side of it they are.

4 - CROFTENGEA PRINT WORKS  / ALEXANDRIA WORKS – West. Alexandria. Bottom of North and Andexander Streets, between the railway and the Leven.

The photos offered here are either within the last 20 years, a period during which the remains were almost all demolished and cleared, or current simply to help with locating the sites. The Vale of Leven Project website (see below) has an excellent collection of historic photos of many sites.