Site of. This is the approximate site of the glassworks which stretched across an area now occupied by the health centre with the Leven to the west and Station Road to the east. To the south is Dumbarton Bridge and to the north the railway. The glassworks predated the railway and that marked the edge of the floodplain.

ACCESS : Easy access to most of the site. There is little to see though, but a visit gives some idea of early industry.

A glance at the map and the name of Dixon is very evident both across Station Road and across the Leven. This was because the Dixon family were prominent landowners and industrialists in Dumbarton and because they took control of the glassworks in 1817. However it was initially established back in 1777.

What you see today is a rather nondescript mix of buildings and roads alongside the River Leven. In its heyday though huge conical structures dominated the town. They are prominent in many pictures from the time. The last one was finished in 1791 but collapsed while the scaffolding was being taken down, killing six men. It then had to be rebuilt. The works extended over six acres bound by the river and the floodplain just beyond where the railway was to be established.

Later improvements to the riverside included a quay and small slipway. These can still be seen. While not advised due to the very slippery surface of the slipway, it is possible to walk down it to the stoney mud at low tide. It is still possible to find the odd nodules of waste glass amongst the pebbles and other junk tossed into the river.

The river was an essential means of transport of raw materials and fuel in and products out. Coal was the main fuel. The use of kelp which contained soda and potassia was a fairly new innovation which improved the quality of the glass which was essentially sand consisting of silica, soda ash and lime.

The Dumbarton glassworks was very significant in other ways too. During its heyday it owned five coal works, four tramways, two wharves, two bottle works, a brewery, a farm and seven sailing vessels providing transport to other areas in Scotland, England and Ireland. The company ran its own shops or sold to others in Dumbarton, Glasgow, London, Liverpool and New York. 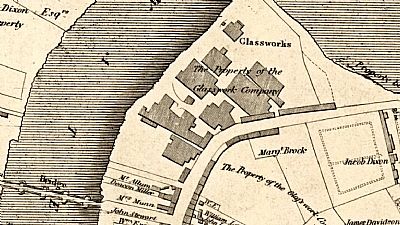 In this map we can see the extent of the works in 1818. The grounds owned by the Dixon family can be seen. On the lower left is Dumbarton Bridge over the Leven. To the top is the lagoon flood plain. The railway had not yet arrived and the lagoon not yet filled in. 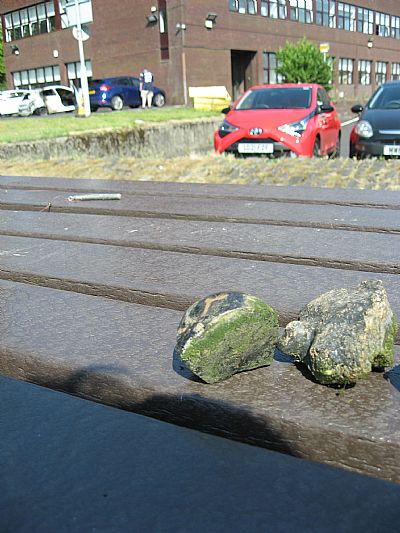 Two glass waste nodules found at low tide near the slipway below Dumbarton Bridge. In the background is the JobCentrePlus building which currently occupies just part of the site. With the glass nodules is an old screw type beer stopper.