During the war, large guns for anti-aricraft defence would have included individual ones at strategic positions behind sandbags or on trucks. These positions naturally are no longer possible to locate although a few stories about them linger. There is a description of the challenges gunners had when firing at enemy bombers flying low overhead. Even at that height they were extremely difficitul to hit. Evidently it was not uncommon to shatter several tenement chimney pots instead.

Locating fully developed gun emplacements can be difficult too. They are not all easily recognisable even when encountered. Those listed below have been pointed out by others.

///connected.soil.bill This is the remains of several buildings that appear to be associated with the emplacement. A camp.

///guideline.processes.walls The actual emplacement as identified by Canmore is close to the factory building.

A four gun-emplacement heavy anti-aircraft battery with associated accommodation camp was situated immediately west of Stirling Road (A813). Depending on your viewpoint, it is described as near Renton or near Bellsmyre. At the time of it being recorded in these two websites, Lomondgate had not yet been formed, but this is the more appropriate location name now.

The battery mounted 4.7-inch guns with at least two light anti-aircraft positions located on the perimeter of the radar false horizon hexagon. The GL mat (gun laying radar) was, unusually, situated within the arc made by the accomodation camp. [Canmore].

Further disturbance of the site is noted as at March 2021 through industrial building work.

Canmore tells us this was a World War Two light anti-aircraft battery, one of at least five constructed to protect the Royal Navy oil tank farm at Mountblow.

A four gun-emplacement battery and accommodation camp was situated immediately orth of Hillend Crescent and each side of Farm Road.. This has been demolished and the site subsequently built over by post-war housing. The four gun-emplacements with four 3.7-inch guns are visible on vertical air photographs, (RAF CPE/Scot/UK/276, 5169-70, flown 1947) along with the remains of the GL-mat (gun-laying radar) and accommodation camp. [Canmore ].

To get a reasonable idea of what they looked like, it can be better toi seek out those in neighbouring areas. They were after all also part of the network that defended West Dunbartonshire too. Large ones can still be seen outside Cardross, Helensburgh and Mugdock near Milngavie.

Cardross : Cross the railway line at the station and walk for some distance along the shore im the direction of the Gareloch. It is fenced off in farmland, but easily visible. 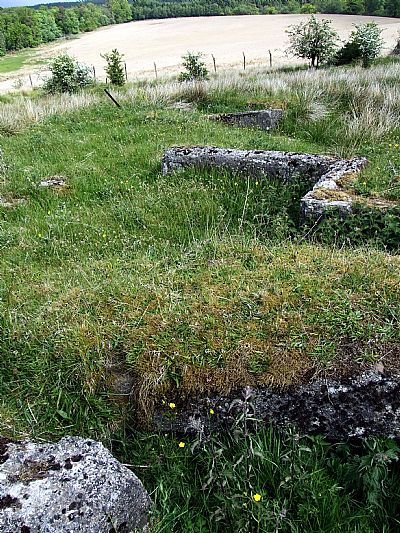 Helensburgh : On the hill above the town. 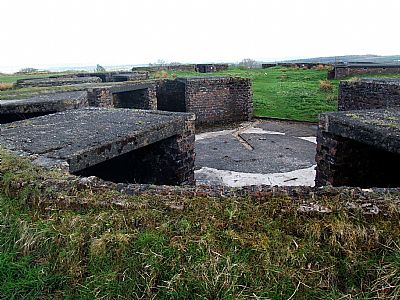 Mugdock Wood within the Mugdock estate.