The old Forth Rail Bridge is iconic and recognised far and wide. In recent years the Forth Road Bridge has been replaced, or more correctly, outdone, rather than superceded by the new road bridge known as the Queenferry Crossing.

Each has a story to tell.

The Forth Rail Bridge

The Forth Rail Bridge, or simply the Forth Bridge (as it was for a long time the only one) really is iconic. It epitomises the zenith of Scottish engineering prowess.

It was built between 1882 and 1890. It was designed by the engineers Sir John Fowler and Sir Benjamin Baker and the contractor for the construction was Tancred, Arrol & Co.

"The form of the bridge comprises three double cantilevers, supported by massive granite foundations, and connected by latticed girders. The bridge spans some 2.5km between North and South Queensferry". (Canmore).

Most of us that have got to know it, picture it persistently covered in scaffolding and protective awning. "Painting the Forth Bridge" entered colloquial language; once maintenance got to one end it was already time to start at the other end again. Improvements in maintenance procedures and materials eventually led to a sigh of relief as the last scaffolding came down in 2011 - at least for a further decade.

I have yet to travel over it, but remain in awe when seeing it from below. Vast tubular structure rises up above. Look closely and you will discern huts clinging the the structure way up there; facilities for those doing the maintenance. 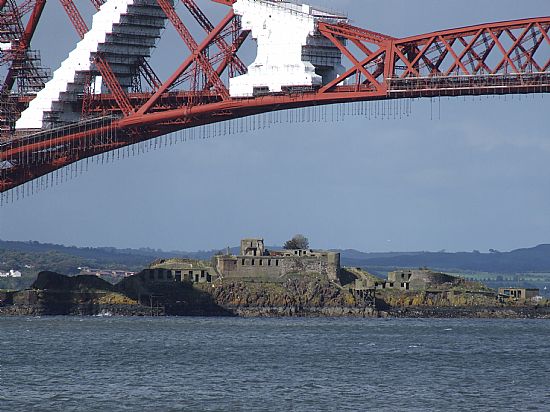 This view from South Queensferry shows some of the then so familiar scaffolding. Beyond is Inchgarvie, a fortified island. (See links below). 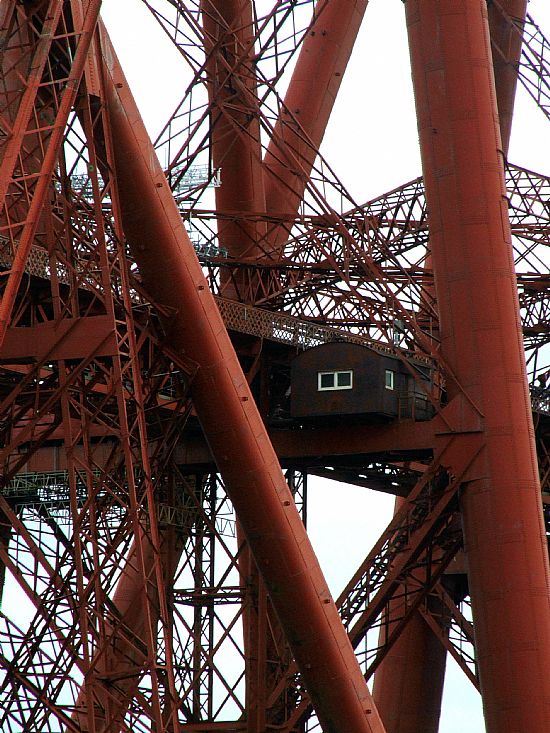 Prime real estate? Near a railway! A maintenance hut clings to the structure.

The Forth Road Bridge

The Forth Road Bridge is one of the world’s most significant long span suspension bridges. With a main span of 1006 metres between the two towers, it was the fourth longest in the world and the longest outside the United States when it opened. In total, the structure is over 2.5 km long. A staggering 39,000 tonnes of steel and 125,000 cubic metres of concrete was used in its construction.

"Guid Passage" was the fitting motto given to the bridge when it opened on 4 September 1964".

This is the bridge that many of us are most familiar with as a crossing of the Firth of Forth although the new Queensferry Crossing is fast overtaking it in terms of usage. Although mention of removal after the new bridge completion put doubts in our minds, it remains very important for relatively localised crossing. It is deemed a "Public Transport Corridor" and serves as the sole provider for walkers and cyclists.

"The Queensferry Crossing opened to traffic on 30 August 2017. This forms the centrepiece of a major upgrade to the cross-Forth transport corridor in the east of Scotland, representing a total Scottish Government investment of over £1.3 billion. I, like many wondered if it would ever get off the ground, but once started, progress was impressive. I had the privilege of passing under it on a cruise ship a few times it shortly before the final link was placed. Some concerns crossed my mind : will the final link actually fit properly?; will the north and south approaches meet exactly?; and will our cruise ship actually fit below it? The final touches were also being made to the new aircraft carrier at Rosyth nearby and that is evern taller. But I needn't have worried. 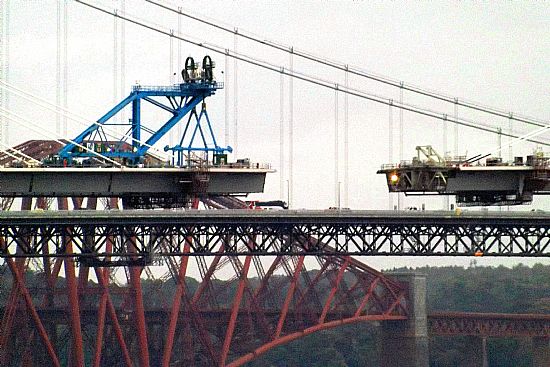 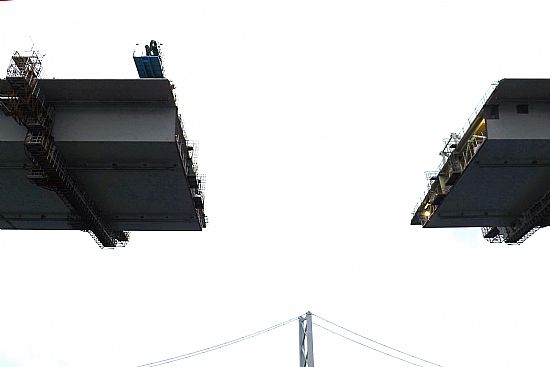 BBC reports the end of the scaffolding : https://www.bbc.co.uk/news/uk-scotland-edinburgh-east-fife-16110496