The Mugdock Reservoir is in fact one of a pair of reservoirs; the other being Craigmaddie Reservoir. There are several interesting structures there besides the restraining walls, but most impressive are these. 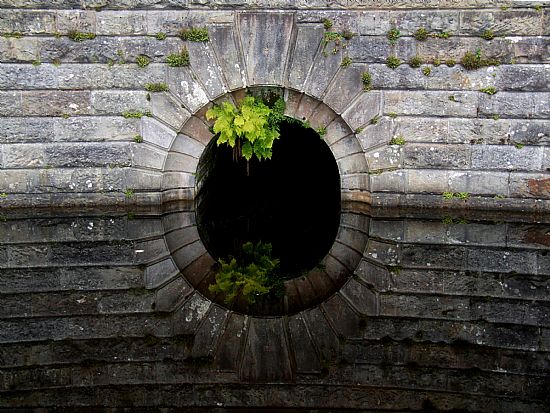 There is a great walk around the pair of reservoirs, or if you are less ambitious, just around Mugdock Reservoir taking the path across the dividing wall. You should preferably proceed anticlockwise from the car park as this leaves the best for the last. As you reach the north west corner you see the above-mentioned gauge basins. Water enters here after passing all the way from Loch Katrine. These stone structures and ponds give glorious illusions of granite floating above the still water, but I have chosen this view of just one of the arches with its simple geometry reflected in the pond. 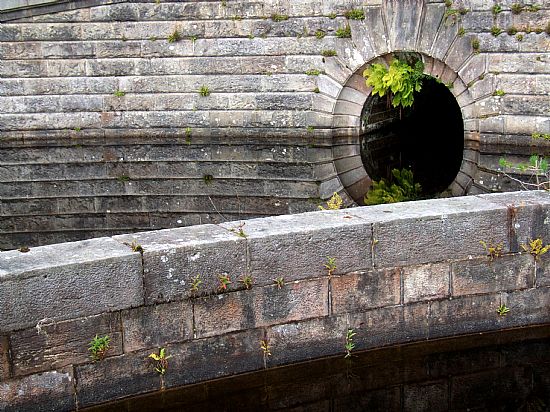 HES tells us more : Mugdock reservoir, which was designed in 1856 and in use by 1860, was designed as the main storage area for the water from Loch Katrine, as part of the Glasgow Corporation Water Works. Craigmaddie reservoir was built as part of the duplication scheme of 1885. The Glasgow Corporation Water Works system, which brings water down to Glasgow from Loch Katrine, was admired internationally as an engineering marvel when it was opened in 1860. It was one of the most ambitious civil engineering schemes to have been undertaken in Europe since Antiquity, employing the most advanced surveying and construction techniques available... The civic pride in this achievement is visible in every structure connected with the scheme, which, in most cases, have withstood without failure or noticeable deterioration the daily pressure of many millions of gallons of water for well over 100 years.

Well it may be water supply engineering, but it is very much part of our great built heritage.