Better known today as a luxury spa for personal pampering, Stobo Castle nevertheless had varied fortunes. Today you arrive at the porte-cochere up stairs into the grand domed atrium. A drawing room and dining rooms occupy the front of the building. Luxury rooms and suites are reached up elegant twin stairs sweeping up from the atrium. Beyond stretch yet more rooms to the west and some luxury suites to the east. And beyond that again one eventually finds the spa facilities including a large pool with full curved window from which the rising sun peers in and bunnies camper across the green lawns. 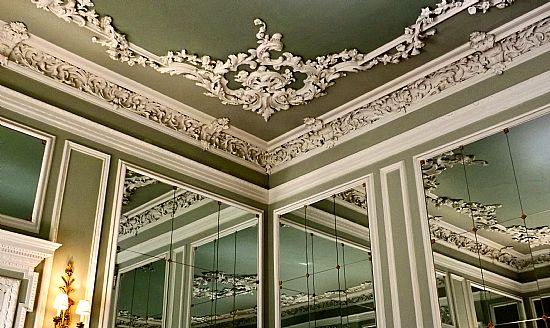 My first photograph shows the corner of the main dining room. The mirrors perpetually reflect the rest of the rooms pastel green and swirling white plasterwork. Other public rooms are panelled. The main space of the atrium though is quite simply classical. As the listing text notes, this is all very contrasting to the exterior which resembles a medieval stone fortress.

In fact the building is in three distinct parts : the front section, which looks like a grand house interpretation of a fortified castle, an immediately connecting section that really looks like a military outpost and the modern spa section. I can't find out any details about that central fort-like section, but the Stravaiging link below give a great deal of relevant information. It certainly appears to be defensive while the main part of the house may pick up similar features, but for image rather than necessity. Life in the Borders had been quite turbulent. That combination of defensive and comfortable sections of the building appear in a picture from A History of Peeblesshire by William Chambers in 1964. Many Scottish “castles” take their image from a tradition of such defensive architecture and are in fact houses. This one seems to have had a bit of both and so deserves the epithet.

The estate was purchased in 1767 by James Montgomery, Lord Advocate and future Lord Chief Baron of the Exchequer, but the castle itself was erected by Sir James Montgomery, second of Stobo, who succeeded his father in 1803. Built between 1805-1811 to the designs of James Elliot, the port-cochere was added later about 1849 by the Edinburgh architect John Lessels. George III was on the throne at the time of its construction. 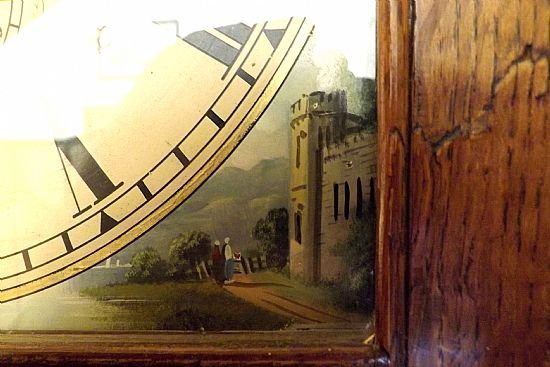 In a corner of the atrium stands a grandfather clock with the inscription John Penderleith - Stobo. It appears to have been made in the vicinity. Look closer and you see what looks like the military part of Stobo Castle. It is not an exact copy, but is this an early illustration of it?

The estate changed hand several times and parts were sold off. 10th Countess of Dysart, lived at Stobo until the mid-1960s, after which it lay empty for over 10 years. In 1971 Leo Seymour bought the majority of the former estate, while Stobo Castle and its immediate grounds were acquired by the Winyard family in 1975, who spent the next few years transforming the castle into a luxury health spa, which opened in 1978. The current Mr Winyard still lords over the castle and has a large and efficient staff to meet your every need.