St Mary's Cathedral is located here due to its selection by Bishop Hay, Vicar Apostolic for the Lowland District, in 1801. He had seen his Chapel in Blackfriars' Wynd burnt down by a mob, and hoped that the new site would be a more sheltered spot, protected by the surrounding buildings. The new Chapel of St Mary's was designed by James Gillespie Graham and opened in 1814. Under the successors of Bishop Cameron the church was considerably embellished and in 1878 on the restoration of the Scottish hierarchy it became the pro-cathedral of the new Archdiocese of St Andrews and Edinburgh, becoming the Metropolitan Cathedral in 1886. Its original façade was in the Gothic perpendicular style with pinnacles, later becoming rather subdued by all the changes. 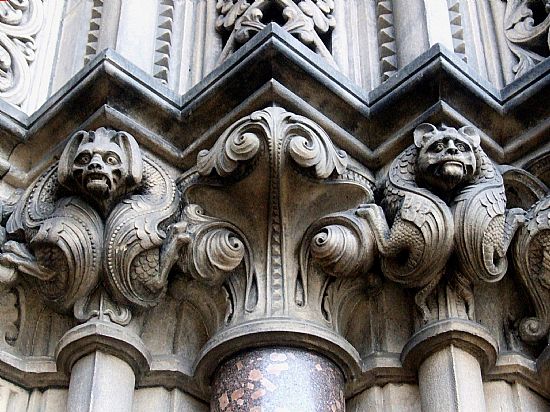 Over the ensuing years further changes and extensions have been made. It was only in the 1970's that the porch and baptistery were removed and replaced by a more spacious porch one and in the process revealing the original façade in all its splendour for the first time this century. There a great many features internally and externally, but it is these creatures that writhe in amongst the foliage, staring out at us menacingly. Their very forms seem to be morphing from foliage; their forms the stuff of nightmares or superstition. Or perhaps simply the creations of mischievous sculptors in keeping with a long line of ecclesiastical architecture from Gothic to Victorian. Whatever they are, they certainly make us question our lives and seek salvation.

There have been many stonemasons involved in the cathedral over the years and it is pleasing to note that the tradition continues with practical experience provided for apprentices during restoration work.

Sir George Gilbert Scott design as selected from a short list of three. His approach was fairly conservative, though the internal diagonal buttresses supporting the tower were highly innovative. The design borrowed heavily from the detail of Scottish medieval abbeys. The result is magnificently ornate, a glimpse of how much was lost to us as a result of invading English armies in the 1540s and the Reformation.