The port of Greenock has depended for its existence on shipping and related trade and industry. The topography has generally meant linear development. While an impressive residential area runs along the esplanade, the main commercial area remains concentrated towards the docks. (Or where docks used to be. Some sections were filled in just a few years ago). And this is also where we find some fine administrative, civic and religious buildings. The town has been served by a railway running in along the contours, but more imposing is the solution to the increase in road transport : a raised roundabout with parking in the centre. While this disturbs the link between foreshore and civic spaces to landward, some of those spaces retain their individual integrity. Cathcart Square is one of them. 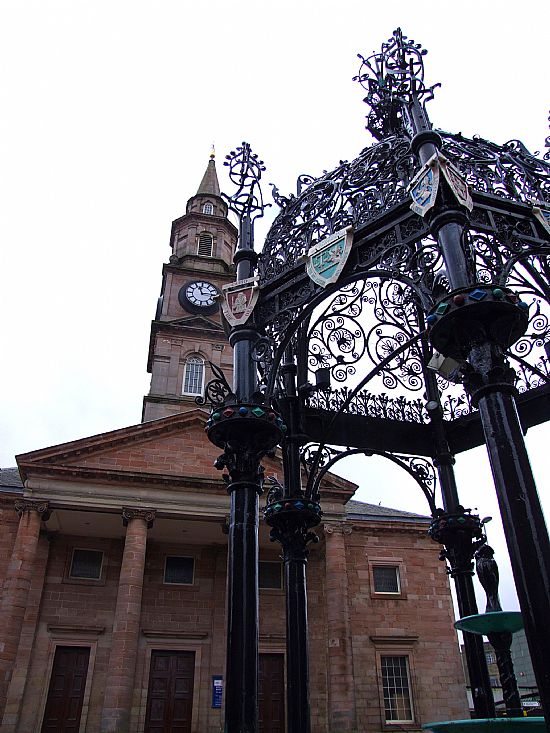 On one side of Cathcart Square we find the municipal building with its fine stonework and imposing Victoria Tower. Diagonally opposite that is the Mid Kirk as shown in my photograph, with the Lyle Fountain in front of it.

With the amalgamation of congregations, the Mid-Kirk became known as the Wellpark Mid Kirk, but has also been affectionately referred to as the Toon Kirk. The church is classical in form with an Ionic portico above which rises a steeple with very obvious inspiration from St Martin-in-the-Fields in London. The general look of the church is attributed to Lord Cathcart (after whom the square is named) and the rest was designed by James Ewing. The body of the church was built in 1760 with the steeple added in 1787. The building was refurbished in 1878 and restored in 2000.

The ornate Lyle central fountain was gifted to the town by Provost Abram Lyle in 1880. It was designed by Mr F.A. Scudamore of Coventry. Bronze shields which bear the crests of the Ardgowan and Cartsburn families and 16 other prominent families of Greenock can be seen above the fountain.

Abram Lyle was a successful businessman born in Greenock in 1820 and was a partner in the largest shipping fleet in Greenock, transporting sugar from the West Indies. With four business partners Lyle bought the Glebe Sugar refinery in 1865. He was the Provost of Greenock from 1876 – 1879.