To understand the Pearce Institute, one has to appreciate its position within Govan and that in turn requires an understanding of Govan itself. Govan had thrived as a medieval settlement, but there is even evidence of it being an important centre prior to that. The nearby Govan Old Parish church was only built in 1888, but stands on a very ancient site. 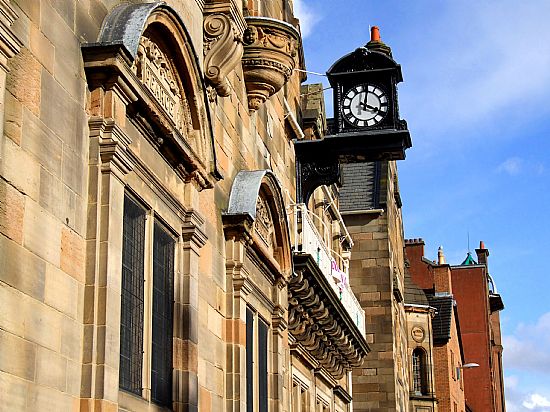 Govan has been at the forefront of social change as well as industry, but was to experience years of decay and social challenges. That is no longer the case and the Pearce Institute has played a vital role throughout.

It was gifted to the working men and women of Govan by Lady Pearce in memory of her late husband, Sir William Pearce, under whose guidance Fairfield Shipyards became the biggest and probably the most technically advanced shipyard in the world. It was designed by one of the leading architects of the day, Sir Rowand Anderson and was completed in 1906. It was built to serve the community and housed reading rooms, a gymnasium and instructive workshops. In recent years it has undergone significant repairs and upgrading and today serves a range of community groups and social economy groups as well offering venues for hire.

Govan itself is experiencing a new lease of life and pride. For years considered a backwater of the city, it is now becoming a sought after place to live and establish businesses. This transformation and newfound pride was brought home to me while I was taking this photograph. A young local man, very much the worse for wear from a liquid diet, someone who evidently had grown up in an area of deprivation and loss of hope, someone who was very loudly vocal in words that cannot be reproduced here, came up to me. But instead of berating me (as he just had his girlfriend) or demanding a handout, he proudly lectured me in colourful language on the importance of the Pearce Institute to his community and highly recommend that I visit it. Such restoration and urban renewal work is making a great difference.