Princes Square is a popular shopping precinct facing onto the long pedestrianised artery through the city centre of Buchanan Street. The premises are interesting, being formed as a covered square from other buildings. Inside, the balustrading of the galleries is wrought steel, reminiscent of art nouveaux, yet also something of a modern day arts and crafts interpretation. The art nouveaux theme also occurs centrally on the front façade in the form of a large peacock, perhaps symbolic of the fashionable people promenading up and down the street and finding new outfits inside. 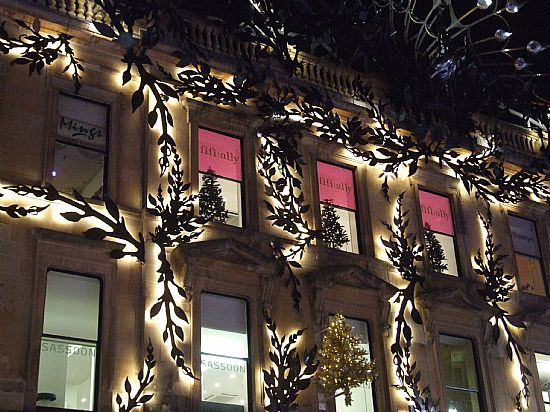 Hugh Martin & Partners were commissioned in 1985 to renovate the Princes Square building. This included decorative arts components such as the balustrades and the famous “Peacock”. Following a partnership with the Workington firm Shepley Engineering, Alan Dawson teamed up with traditional artist-blacksmiths. They started the program in 1987 and in 1990 the main exterior peacock was added in part as a contribution to the City of Culture Festival in Glasgow that year.

In 2011 the dignified, but otherwise plain sandstone façade got a complete make-over. Inspired by the ancathus foliage so often found as ornate carvings on Victorian buildings in the city, sculptor Kenny MacKay created a rich overlay across the whole front façade and even part of the rear façade. This powder coated aluminium artwork is back-lit and really comes to life as evening encroaches. It was part of the centre’s £6 million upgrade undertaken by 360 Architecture.

Well we often say that some architecture is improved by foliage over it.

But go around to the back where there is a small courtyard and you find something quite different.

Here there is a chubby naked man with a peacock! That peacock theme of a vain bird so long perusing the fashionable and vain human throng along Buchanan Street, has in this rear service yard, something of its alter-ego. This man is unclothed, quite unconcerned about his image. And the` peacock stands, equally chubby, and not bothering to display its fantail. While it is mainly used as a service yard, it is also a back entrance or a through route for many a shopper. Pity about the wheelie bins. The foliage that we find on the front façade is repeated here although on a smaller scale. This bronze man and fowl and other hard landscaping act as a beguiling introduction to the shops within. 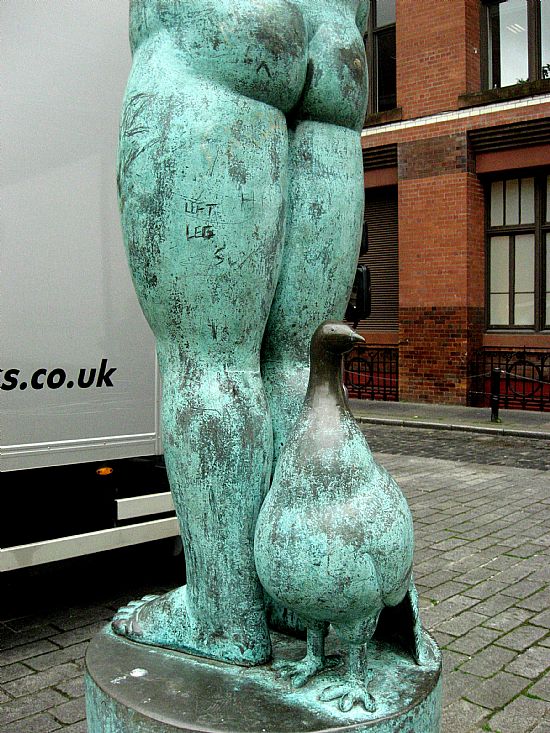 This creation is one of many by Glasgow artist Shona Kinlock dotted around the city. Focussing on the man in my photograph is too obvious. What is that peacock up to? Is it trying to distract our gaze from the burly bum? Or do both of them think that by loitering at the back here they can let their guard down?