Bo'ness is one of those rejuvenated towns on the Firth of Forth. The restored Hippodrome Cinema is itself a significant place to visit, but I have chosen this juxtapositions of roofscapes in North Street. This photograph was taken in 2009 and concentrates on the one to the right, its rather orange copperas (a ferrous sulfate) tinted lime harl fresh and bright. 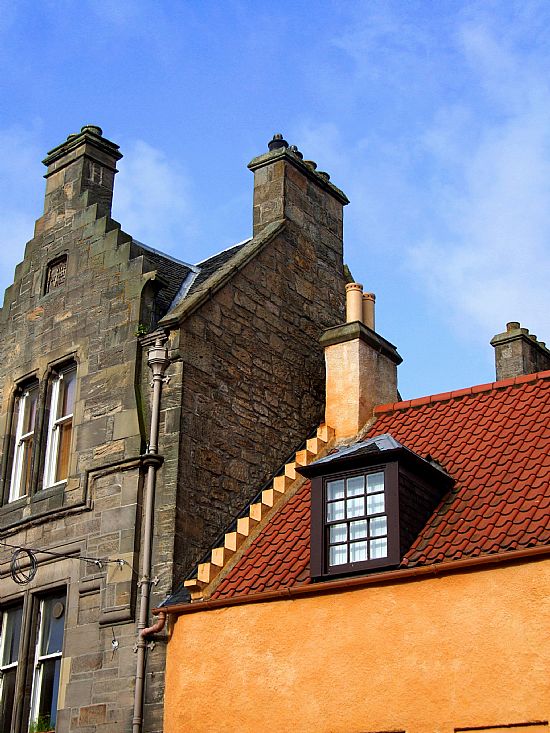 This particular view is of Dymock's Building, actually a group of buildings arranged around a courtyard, now linked and converted for residential use. It was built before 1650 and fued by the Duke of Hamilton to William Thomsoun. In 1720 it formed part of the dowry of Jean Gregorie when she married Thomas Dundas and was significantly altered at that time to form a fine residence. It seems to have been owned by a Mr Dymock in the early 19th century, hence the name. 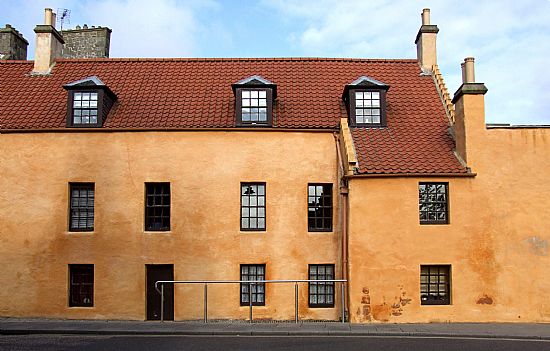 Being private homes now, it is generally not open to the public, though the common room is available for use by local clubs and societies. The building is now owned and managed by the Castle Rock Housing Association for the benefit of elderly residents in Bo'ness.

It fascinates me that buildings of that time, even simple ones such as this, could have looked so cheerful in what was otherwise quite a hard drab environment. Why do we see such austere, grey buildings these days?