This is a view at dusk from Hall Street. This “B” listed building was restored a few years ago with significant internal alterations to change the layout to something more practical and appropriate. It now houses not just a restored town hall, but various function rooms and display rooms as well as a coffee shop. There are displays of Singer Sewing Machines and ships reminding us of the area's once important industries. There had been as small museum within one corner of the building until superseded by new areas for art and temporary displays. One of the art gallery spaces look out onto an enclosed garden where the “slipper baths” once stood. An area along Hall Street used to be a police station. Across the road was the fire station, now flats. 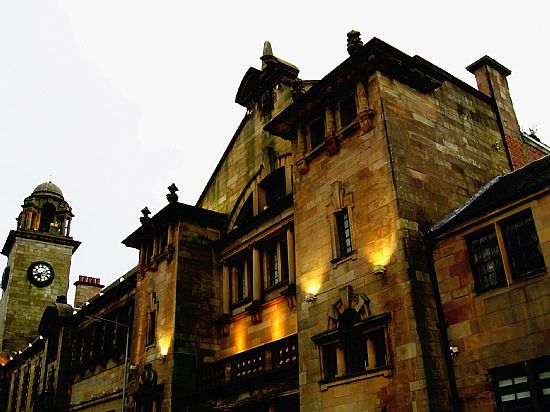 Almost the whole block was civic building comprising the town hall, council chambers, the police station and the Bruce Street Baths. And therein lay an issue when seeking to renovate the complex. Listed Building criteria clearly define that anything within the curtilage of a property is included in a listing. However West Dunbartonshire Council wished to demolish the baths. To them it was a separate property and not listed. The listing text made no specific mention of them. The Strathclyde Group of the AHSS was one of several groups who protested the impending loss. The Bruce Street baths had two components. “Slipper baths” are those including regular baths, saunas etc. ie where one went in ones slippers after a hard day (or week) of work when such facilities were rare at home. An alternative explanation is that the name comes from the shape of bath with one side curved up high to lean against. These baths adjoined the main bath : the swimming pool. Enter the scene, Martin Docherty (who was to become an MP). With his efforts part of these baths, ie the main swimming pool was to be listed separately as “C” category and is protected, if a little belatedly. The “slipper baths” though have gone and the space vacated forms the small gardens mentioned above. That is very pleasant. It is viewed through continuous glazing of the Garden Gallery and can be accessed to enjoy the surroundings. Those surroundings include much of the retained outer wall of the Slipper Baths, its fenestration now missing; simultaneously fascinating as a historic remnant and a bit disturbing as on an otherwise peaceful scene.

The main bath though remain almost intact. It is hoped that one day it will be reused somehow, if not as a swimming pool, then perhaps an exhibition and museum area. See the separate page for it. 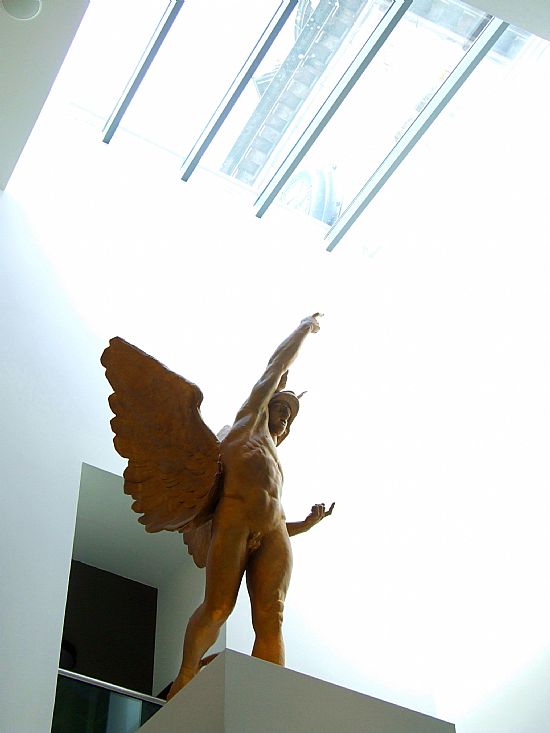 The premises got off lightly during the Clydebank Blitz. The cupola was crowned by a large statue of Mercury. This came down, not during the attacks, but during a hurricane in 1968. It stood since then in the foyer until cleverly integrated into the renewal designs internally but seen lit from a rooflight with the tower rising above. The sculptor was Albert Hemstock Hodge.