This is certainly one of Scotland's most famous villages. Not just old, but really ancient. Neolithic in fact. That refers to the later part of the Stone Age, when ground or polished stone weapons and implements were prominent. Neolithic followed on from the mesolithic era. Such categorisations are useful although transitions were not as neat or abrupt in reality. It is more likely that technical changes were gradual. Anyway the term neolithic generally signifies a move from hunter gather to more one of a settled farmer. With that would have come changes to religious beliefs and social practices and we begin to see evidence of this through burial cairns and stone circles. On the whole though there is little to teach us of domestic life. Timber shelters have decayed and stone collapsed. Skara Brae therefore provides us with a rare chance to see into the daily lives of people about 5000 years ago. 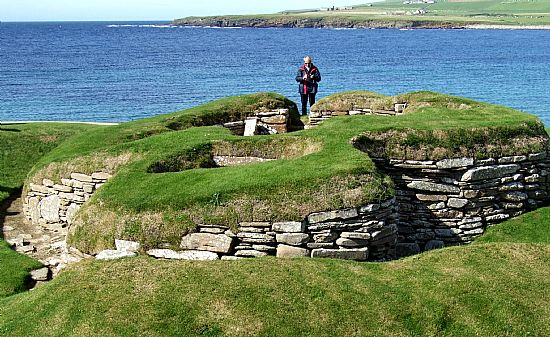 Unlike Scotland's oldest homestead, the Knap of Howar, also on Orkney, Skara Brae is tight-knit settlement. Perhaps because of the scarcity of timber, stone was not just used for monuments, but for homes to a greater extent than we find elsewhere. And that is to our benefit as it has lasted indefinitely. The builders built into the soft soil to reduce their exposure to the sea winds. The trouble though has been the relentless buffeting of the sea. It was because of a storm that Skara Brae was discovered, but it has also almost been its demise. What you see today may well only part of a greater settlement. Fortunately intervention such as with the great retaining wall have preserved most of it. 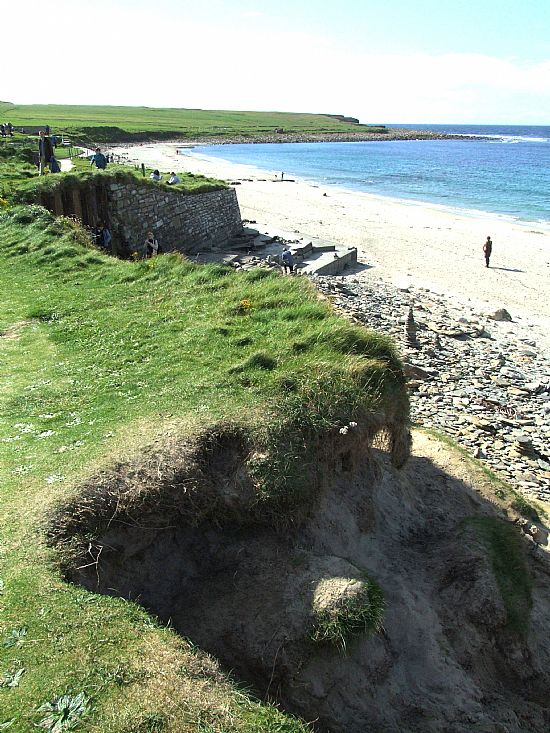 It is inappropriate to try to describe this archaeological site in any depth here, but it would also be remiss to ignore it in this website. It is after all an extremely important architectural creation. What fascinates me is the ergonomic design around the practical everyday family needs of the occupants. An intimate community, most likely from an extended family lived here. Activities, movement between areas, social hierarchy and structural dictates all come together. Some parts such as entrances have stone lintels borne from the stone retaining walls. Wood, whale bones etc would have formed the roof structures of most spaces and been covered by brush, insulated with heather and waterproofed with skins. Within the spaces we find furniture made from the same stone.

We see this complex of tightly bound homes with a modern eye. The roofless spaces of dry stacked stone walls retain sand, but would have been been intimate and smokey. The residents would have been very aware of their co-inhabiting spirits of past generations and other creatures; of the vagaries of the seasons; of the cycles of life and the need to ensure the continuity of their place within them; of availability of food.

This rather introvert community nevertheless saw itself within a greater existence. Observation of the celestial behaviours would have enabled a better understanding of the great cosmic calendar and how it affected them. For us to in turn understand that we need to also visit the stone rings, mounds and cairns in the vicinity. For the moment though we may enjoy the neat lawns capping the surviving walls of skara brae almost as organic abstract forms. But to truly see into their origins we need to try to understand their context.