We all know Glasgow Central Station as an impressive sprawling edifice of engineering with an equally impressive architectural interpretation of the Renaissance style wrapping around it. The entrance building rises in administrative office which in turn merge seamlessly into an elegant hotel to the north west corner. 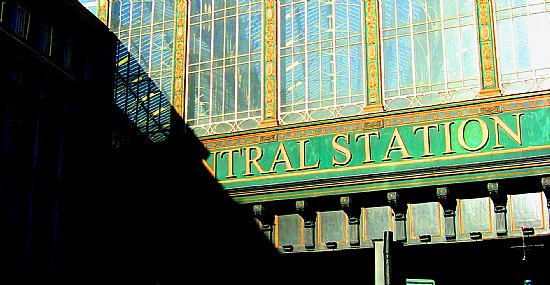 This is the gateway to the rest of the United Kingdom and also the introduction for a great many people to Glasgow and sometimes also the rest of Scotland as trains leave and arrive to tight schedules. The railways were the lifeblood of Glasgow's industry and working population and play as vital role as ever.

The original station, opened in 1879 over what had been the village of Grahamston. There were 8 platforms which led to 4 tracks over the bridge across the Clyde, built by Sir William Arrol.

The station was soon congested and the first of various additions and alterations was begun. The low level service was added in 1896. By 1900 the station was again found to be too small. From 1901 until 1905 the original station was rebuilt.

It now has a spacious concourse complete with shops and cafés. To the north west side and looking out above the concourse is Central Hotel designed by Robert Rowand Anderson. The lower level includes an undercroft partially used as parking, but there are also forgotten areas down there; unseen unless you get yourself onto a tour in the dust and gloom where you may see disused lines and stores and even a World War I mortuary. But lets turn our attention to a part of Central Station that is accessible to all, in all weather, at any time.

Argyle Street runs in below the station from the west before turning into a pedestrian concourse. This underpass has provided refuge from inclement weather to Glaswegians for generations. Known as the Hielanman's Umbrella for this very reason, it has also served as a useful rendezvous point for friends or lovers. The nickname though comes from the numbers of Highlanders who arrived in the city, so many of whom couldn't find accommodation; displaced because of the continuing implications of the Highland Clearances well into the 19th century.

My photograph shows the Highlander's Umbrella on the east side. The great glazed window of the station above attests to the merging of engineering and architectural innovations.