Founded in 1870, Arlington Baths Club is a welcoming and peaceful sanctuary for citizens of Glasgow, offering a relaxing getaway in the heart of the city. 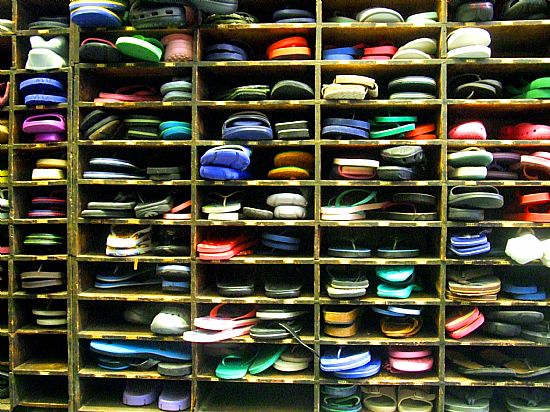 Owned and run by members for members, this community club is the oldest of its kind in the world. Run on a not-for-profit basis, the 'A' listed historic Victorian bathing complex houses a 21 metre skylit swimming pool, a unique Turkish suite, saunas, steam room, free standing slipper baths and hot tubs, a stylish members lounge and a bright, state of the art gymnasium.

Taking pictures of the users here for a private moment in a busy day, getting some exercise or simply chilling out would be too intrusive, but you can find them in an indirect way. My photograph shows their stacked slippers and sandals.

These baths were designed John Burnet Senior in 1871, with later additions including the Turkish Baths in 1875. Additions were by A Myles of 1893 and B Conner of 1902. They are considered an important example of a Classical style baths complex, with Italian Renaissance influence to detail.

Arlington Baths was an exclusive club aimed at Glasgow's rising middle-class. It formed a part of Glasgow¿s Charing Cross and West End expansion of the city, which was becoming an increasingly desirable area to live.