A visit to Greyfriars Church necessitates at least a passing acknowledgement of the little statue of Greyfriars Bobby by sculptor John MacLeod, but as you approach the church through the old gates you become aware of history of a different kind. It has played a very prominent role, not only in Edinburgh's history, but that of Scotland too. 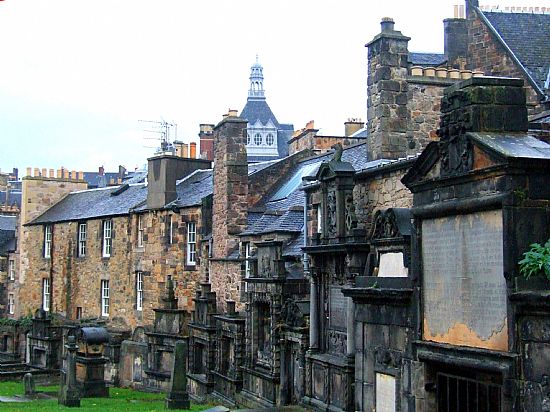 It stands in the Grassmarket district where there used to be Franciscan convent, which is where the name derives. In 1562 Mary Queen of Scots had granted the land, which was then on the outskirts of the city, to the Town Council for use as a burial ground. The Flodden Wall and later Telfer Wall can still be seen in the Kirkyard. By 1602 building had started re-using stonework from the Dominican convent at Sciennes. Progress was slow, and the new church did not open until Christmas Day 1620.

In 1638 the National Covenant was presented and signed in front of the pulpit. …. Little of what you see survives from the original church, a simple six-bay building in late Gothic style with side aisles and pillars forming arcades.

In 1845 fire gutted Old Greyfriars and destroyed the furnishings of New Greyfriars. Even today the sides of the windows in the eastern part of the church show traces of fire damage. Restoration of Old Greyfriars took many years. Following the fire the original roof and arcades were removed and, a few years later, a new, single-span roof introduced. The windows were made into lancets and stained glass - the first in any Scottish parish church since the Reformation was introduced in 1857.

Today, as with many church buildings, it has suffered from reduced congregations and it merged with another one. The building continues to be used as a church although to a reduced programme, but also accommodates other events, not necessarily religious such as orchestral concerts, operas, jazz festivals, organ recitals, art exhibitions, conferences, lectures and drama productions.

While the church itself is very interesting, it is the churchyard that I want to draw attention to. It is steeped in atmosphere and can be rather spooky. Even though tightly wrapped by the perimeter wall, surrounding buildings seem to turn their back on it. Visit it in the failing light on a winter evening before the heavy gates close on you and a cold drizzle dripping off the tombstones and you sense those famous ghosts just waiting to squeeze out from between the shadows.

My photograph shows the curve of the enclosing perimeter wall towards the medieval Grassmarket's juxtaposition of old stone buildings. There is hardly a gap between the memorials along it. Many of them and the tombstone dotted elsewhere around the church sport skulls and crossed bones to blatantly remind us of their contents. Although tightly hemmed in by the old city buildings, many windows overlook the kirkyard and must have witnessed some eerie sights.