Wikipedia, that authoritative online community source of wisdom tells us : A Tardis is a product of the advanced technology of the Time Lords, an extraterrestrial civilisation to which the programme's central character, the Doctor, belongs. A properly maintained and piloted Tardis can transport its occupants to any point in time and space. It has become well known through the science-fiction tv series, Dr Who. 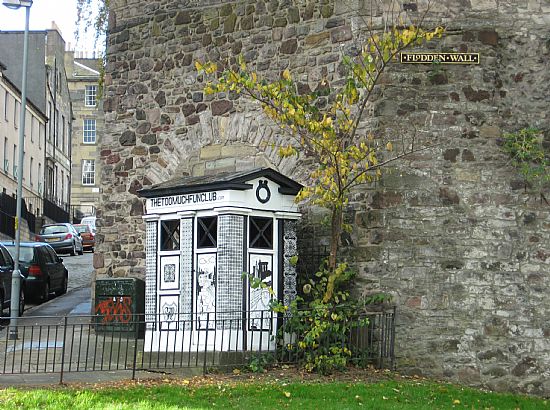 So is what you see in this photograph something fictional?

Well yes and no.

This little building with classical references in Edinburgh is not what it appears to be. It is in fact a creation of the TMFC (The Too Much Fun Club) a Visual Art & Illustration Collective. But it looks strangely familiar. You must be thinking of that ubiquitous Tardis.

Such buildings are in fact Police Boxes. Many have been converted to new uses such as coffee shops. Police Boxes were established as minature local police stations, somewhere to contact your local policeman and for him to make calls from. Edinburgh and Glasgow Police Boxes are different. The Edinburgh versions have pitched roofs and are strangely reminiscent of classical buildings in miniature. That is because they were designed by Edinburgh's city architect, Ebenezer MacRae in 1931, in line with the city's image of the Athens of the North. Glasgow's Police Boxes are more cubic and panelled. It is the Glaswegian version that is most like a true Tardis. Hey, but whose is best at time travel?

Today Edinburgh only retains segments of its protective walling. As it grew more and more development occurred beyond its main King's Wall. With security an ever present issue, a new wall was required. This was brought home by the Battle of Flodden in 1513 when an estimated 17,000 men led by James IV were slaughtered by the English. Some claim that it would never have been effective against such an attack and was intended to better control trade and act as a deterrent to smugglers.

So this historical corner signifies discipline through the eras from the 16th century to the 20th and across many more with the help of Dr Who.