This wonderful building in St Vincent Street is properly known as the United Presbyterian Church. This photograph shows just part of the assertive sandstone spire, but this immediately marks it out as by Alexander Greek Thomson. It is quite naturally listed “A”. 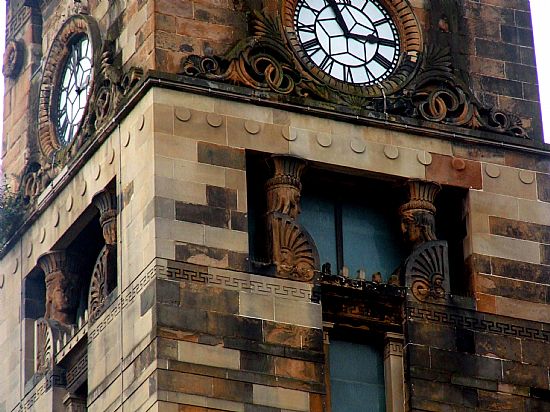 Thomson (1817-1875) designed three striking United Presbyterian church buildings in Glasgow, this being one of them; the other two being at Caledonia Road (1856) and Queen's Park (1867). Of the three only the St. Street church survives intact (That in Caledonia Road remains as an empty shell and the one at Queen's Park was destroyed by WWII bombing.

Thomson was a devout Christian and a member of the United Presbyterian Church.

His nickname comes from his ardent love of Greek architecture. While what we see is not exactly Greek in structure, his buildings always feature Greek inspired motives and sometimes other middle Eastern. forms He was otherwise an architect very typical of the Victorian era although he he interpreted this in his very unique, often eclectic way. This is most evident in this picture. His bold interior designs and colour schemes for churches in particular were strongly influenced by Biblical descriptions such as of King Solomon's Temple.