Quite near the eastern extremities of Edinburgh Airport and reached either directly by car or on foot from Crammond Brig, this otherwise forested area holds some surprises. I am always interested in the aesthetics of crumbling buildings. We have few intact castles. Most are picturesque ruins. Yet this can be a contradiction when discussing preservation and conservation or our built heritage. Castle ruins of course can be dramatic, their state relating to unsettled times now past, although more likely due to neglect until they were recognised for their historic value. What then of ruins of country estates and residential buildings? That can only be put down to neglect or changing needs or economic challenges. Yet ruins can expose a rawness of materials and structural technique giving way to nature reclaiming them. It is very rare to find modern ruins that look anything but neglected and turning material for landfill. 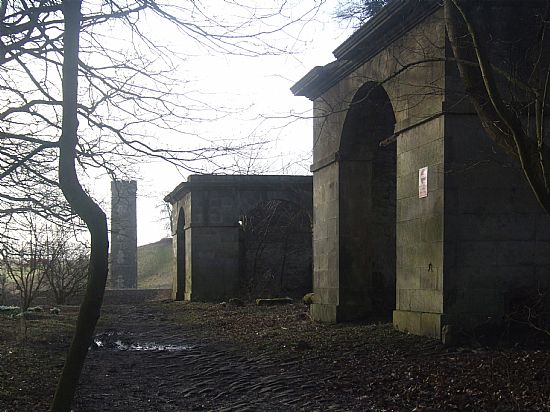 I came across Cammo estate one morning with the sun struggling through an early mist. This is now a pleasant walk amongst trees. There are the remains of several building. Those in this photograph are of the coachhouse and stables, sturdy and geometrical. Beyond is the estate's water tower looking more like a fortification.

They were built in 1811 and have the initials “IW” on the frontage to the architect, James Watson and became referred to as Watson's Stables. They formed part of a group within Cammo Estate, (some of which was by other architects). These included a bridges, boundary walls, a walled garden and the water tower as well as what is thought to have been the piggery. The main house, now a consolidated ruin,dates from 1693 and believed to have been designed by Thomas Wilkie, still gives an idea of its classical form.

The grounds themselves were planted by Sir John Clerk of Penicuik from1710 onwards.

Gillian Tait writing in 111Places in Edinburgh that You Shouldn't Miss tells of how it passed through various owners. In the mid-20th century, the cash strapped dowager of the Maitland-Tennant family allowed it to become overgrown. Her infrequent sorties outside the gates, seated in sombre dress in the back of a carriage, earned her the nickname of the Black Widow of Cammo. It is most likely from this building that her carriage occasionally ventured.

And a walk on the Walk Highlands website : https://www.walkhighlands.co.uk/lothian/cammo-almond.shtml