Culross Town House sits prominently on the frontage across from the Firth of Forth. It is thought to have been erected in 1626 as this is the date appearing above the lintel of an inserted doorway, later converted into a window. The front of the building was altered, and the forestair and clock-and-bell tower were added in 1783 giving it much of the dignified form one sees today. This picture shows the left flight of symmetrical stairs up to the main entrance with a neighbouring house to the left. 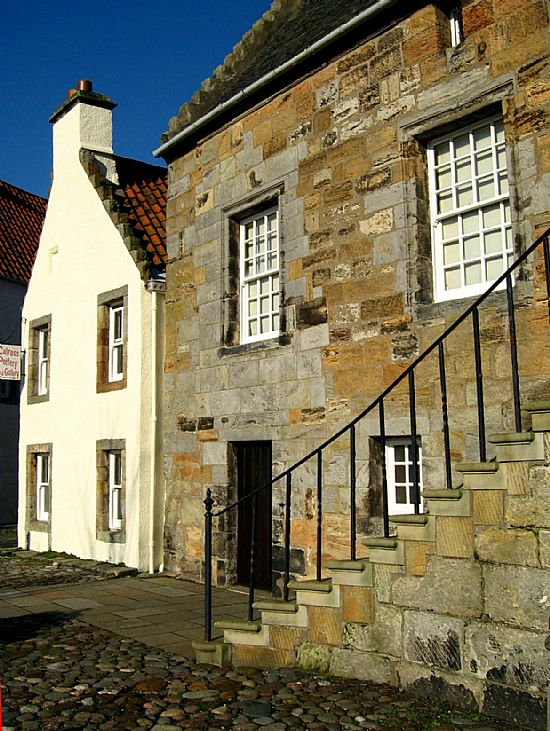 I am very interested in the juxtaposition of materials, details, scale and other features of contrasting buildings. Sometimes they work; the contrasts adding richness and interest. Sometimes they don't; the contrast demeaning the quality of each. The Architectural Heritage Society of Scotland's Cases Panels concerns itself with alterations and interventions into historic built environments, most often with planning applications to Listed Buildings and Conservation Areas. The answer for compatible yet different neighbouring buildings seems to be found, amongst other aspects, in scale and materials. These buildings that we find here in Culross are not just of similar vintage, but also a good example of suitable scale and materials.

The listing text adds that it was also known as Culross Tolbooth. Prior to the reclamation of the Sandhaven in the late 19th century, the town-house sat closer to the edge of the Forth. Culross was erected a Burgh of Barony in 1490 and a Royal Burgh in 1588. The town-house was built as a council chamber in 1626 (to replace an earlier one) and remained in use by the town council until 1975 when local government reorganisation made it redundant and it was passed to the National Trust for Scotland.....The Culross Town-house follows a pattern used for many other town-houses; prison and cells are found on the ground floor, the council chamber and court room on the principal 1st floor and further cells on the upper floor. By the early 17th century it was considered an obligation of every burgh to have a clock to call meetings and public events and to mark rising time and curfews.....The Culross clock mechanism was made by Laurence Dalgleish, 1783. At this time, the double forestair, clock tower and probably the council chamber panelling were added. The building was renovated by Ian G Lindsay and Partners in 1957-1959.