George Square has seen much of the calm and restlessness of Glasgow from the sharing of lunchtime sandwiches with pigeons to protests and even violent skirmishes. Funfairs and pipe bands and tourist groups. And great controversy about its future. 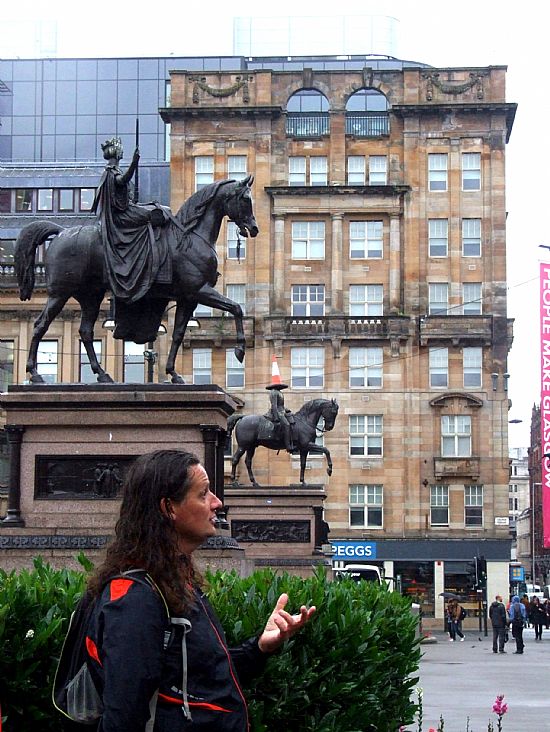 George Square began as part of the city's then innovative Georgian grid layout in 1781. Back then it was little more than a muddy open space, a hollow filled with dirty water and used for drying washing and even slaughtering horses. Between 1787 and the 1820s it became more defined as Georgian townhouses sprung up at each end as well as hotels along its sides. In 1842 Queen Station linking Glasgow and Edinburgh opened at the north west corner. A decade later it had became more of a mercantile centre and the grand Merchants House opened there in 1877. It was only then that this space really could be considered a public square. It is overlooked on its east side by the City Chambers, an elegant edifice that adds great decorum to the space. 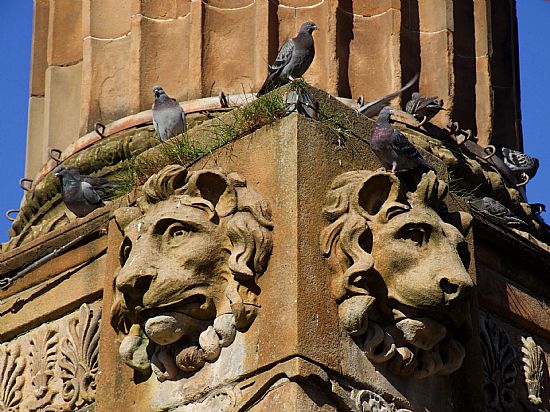 The square was named after King George III. It has been intended to erect a statue to him in the centre, but with the anxiety of the city's Tobacco Lords to the British defeat in the American War of Independence in 1783 and his unstable mental state, support for him dwindled. Instead we find a statue to Sir Walter Scott in the centre. He stands surveying the city from atop a tall Doric column by Alexander Handyside Ritchie. The sculpture itself is by John Greenshields. Various other sculptures and monuments have been added over the years. Politics has never been far away. Their selection and arrangement influenced and motivated by changing tastes and allegiance and erupting history. I have attached a link to sources that identify and describe them, but an even better way to understand them is to join a guided tour. Each Doors Open Day in September one can find such events on the programme. Guides such as architect, conservationist and historian Niall Murphy or historian Dr Mark Nixon will inform and intrigue you. There is so much more to these statues than just historic images in bronze.

After World War II the solution to rid Glasgow of its slums was demolition across much of the city. That was accompanied by very different tastes emerging in architecture and planning which was also seen as the key to a renewed, dynamic and successful cityscape. To the then city planner, Robert Bruce, that included pretty much everything old, even the City Chambers. Fortunately good sense and recognition of the city's extraordinary architectural and urban wealth saved it.

But George Square was again threatened just a few years ago when plans to rip it up, remove all (or most) of the statues and turn it into a modernist space were proposed. That too has been thwarted by public outcry. Or has it?

My first photograph shows historian Mark Nixon discussing the royal plinths with Queen Victoria and Prince Albert. The fashionable traffic cone headgear, popularised by Wellington down the road, has been taken up on this occasion, by Prince Albert.

The second photograph is of the base of Scott's column. A monument to Glaswegian pigeons?