Standing much of the year alone in an expanse of grass sweeping down to the sea is this “A” listed bandstand. The Wallace from which it gets its name was John Wallace, a Nainshire man, who we are told emigrated to Australia. It was officially “opened” in 1884 amidst pomp and ceremony and the day was declared a half-holiday. There is a plaque on it noting that it was " Erected to the memory of John Wallace a native of Nairn who died at Ballark Australia 1882. A pioneer who became one of the most successful and respected pastoralists in the colony of Victoria, Ballan Shire Historical Society 1991". 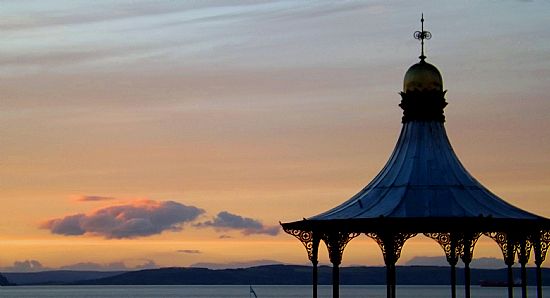 Publicity for Nairn notes that it is a historic burgh of Nairn and was once known as Invernairn. It was granted a royal charter by William the Lion around the end of the 12th century. Seeing that William the Lion has cropped up, this refers to William I or the "the Rough" who reigned as King of the Scots from 1165 to 1214.

Nairn's sandy beaches are very popular and it claims a sunny climate (compared to where?). Anyway this evidently qualifies it for the title of "the Brighton of the North" and provides the setting for this bandstand.

On the day that I took this photograph there was a fine sunset across the Firth of Moray and the cast-iron columns, steeply curved lead covered roof with its cast-iron finials stood elegantly in silhouette.