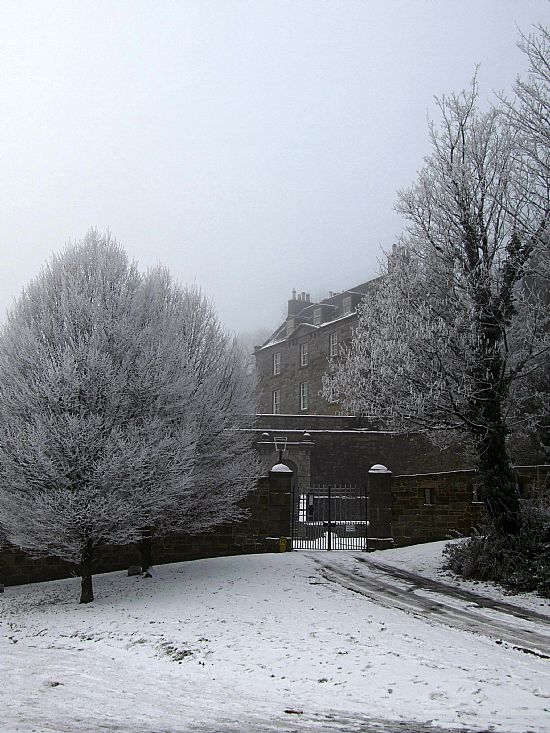 Dumbarton Castle makes the most of this strategically located geological vantage point. There are various buildings and a perimeter wall rather than a single castle, but it is still imbued with a great sense of place and time. I took this picture one wintery day. It seems to emphasise the isolation that it could endure in its role of defending the region. You see the Governor's House at the first level above the gateway. 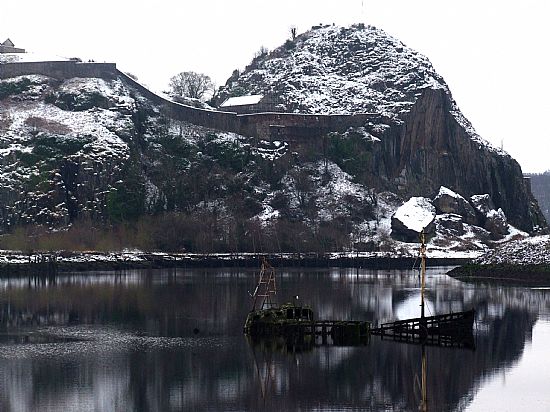 Snow adds drama to the Rock from across the Leven. Abandoned boats. Fallen rocks so popular with boulderers. And the sheer face up to the French Prison. Actually there was at one time a route up there from this side prior to the basin being enlarged for shipbuilding.

In the medieval period Dumbarton Castle became an important royal castle, although for refuge rather than as a residence. In 1333 King David II (Robert the Bruce's son) and his wife, Queen Joan, took refuge here after the Scottish defeat at Halidon Hill near Berwick-upon-Tweed. Mary, Queen of Scots sheltered at the castle for several months in 1548, after the Battle of Pinkie, east of Edinburgh before moving to France. The castle was taken by Oliver Cromwell's troops in 1652, but it declined in importance after his death in 1658. New defences were built in the 18th century in response to threats posed by Jacobites. The military left in 1865, but the army made use of it again during both world wars.

But for all that, nature, not invading armies, took a swipe at it in early 2017 when a lightning bolt caused severe damage to a wall turret.

A visit to Dumbarton Castle is highly recommended, but I must warn you that the same impediments to invaders faces visitors too. Lots and lots of steps.