The Kelvingrove Gallery and Museum is so well known and much photographed that it makes little sense to present yet another regular view of it so I have instead chosen one more atmospheric. It is the only permanent building built and to survive the International Exhibition 1901. The character it conveys is that of sheer exuberance, the excitement of paying tribute to the great treasures within and expression of the confidence of Glasgow's worldwide prestige. 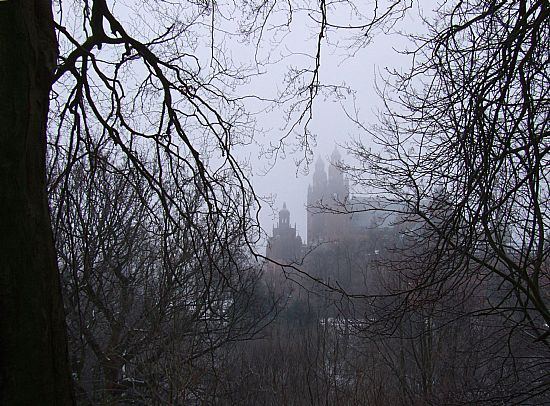 The initial collection came mainly from the McLellan Galleries and from the City Industrial Museum, which had opened in 1870 in the former Kelvingrove Mansion. An open architectural competition for the new building was launched in 1891. In 1892, the winners of the competition were declared as London-based architects, John W Simpson and EJ Milner Allen. Funding came in part from the proceeds of the preceding International Exhibition of 1888, which was held in Kelvingrove Park.

The source of inspiration is interesting. A variety of style are merged, but it is believed that the architects were most influenced by a visit to the great pilgrimage church of Santiago de Compostela, in north eastern Spain. For want of a more fitting label it is considered Spanish Baroque. Those towers and the richly carved external embellishment can give it an almost mystical or fairytale ambience, particularly in certain lighting and weather conditions.

My photograph shows the building from across the River Kelvin and through the trees one cold misty wintering day.

Ideas about how a museum should function and what it should display are constantly changing and there were major maintenance concerns. Add to that was the increasing popularity of the museum in turn producing increasing challenges on the facilities. It underwent major refurbishment costing about £28 million and reopened in 2009.