The Kibble Palace is a favourite place for many Glaswegians, particularly in winter. It can be quite tropical in there amongst the giant ferns even with a damp chill outside. In warmer weather, crowds sprawl across the lawns of the Botanic Gardens or wander between the flowerbeds. 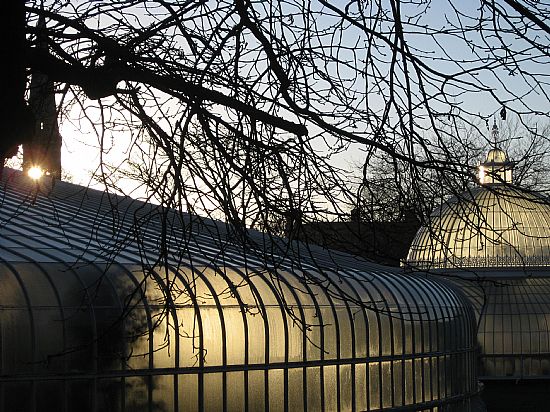 My photograph shows the Kibble Palace in late winter sunshine. Some of the sunshine in fact peeps through the steeple of the former Kelvinside Parish Church beyond, now a successful restaurant called Oran Mor. The Kibble Palace, so much part of Glasgow, did not start out here though.

It is named after John Kibble, an engineer, astronomer and photographer (among other attributes). A Victorian entrepreneur and eccentric. He built his elaborate greenhouse at his home at Coulport on the shores of Loch Long. The architects of what originally was known as ‘The Kibble Crystal Art Palace,’ were John Boucher and James Cousland.

In 1871 Kibble entered into negotiations to have the structure dismantled and moved by barge to Glasgow where it was to be reconstructed in the Botanic Gardens. It was much enlarged at the time of the move with the addition of the large circular dome 150 ft (46m) in diameter and the extension of the transepts to form an impressive front elevation. It opened there in 1873.

Being able to be taken down and being moved here indicates something of its structural “kit” nature. And that happened again in 2003 to allow full restoration off site before being re-erected. It was reopened on Saint Andrew’s Day in 2006.