This extraordinary and very grand building has at its heart, not politics or religion, but the trades of a bygone era. But that is not far away. My photograph depicts Mary Queen of Scots. This is one of three such windows in the Saloon that are indirectly lit from the stairwell rooflight. The website elaborates on the notes below each of them : In 1915 Deacon Convener William Beattie, Late Deacon Convener A. Graham Service and Collector Jackson Millar donated the three stained glass windows which were made by the Glasgow glass strainers and decorators: Guthrie and Wells. The Deacon Convener is dressed as a Burgess of 1604. The portrait on the Far left is that of Mary Queen of Scots. Mary Queen of Scots restored the right to elect Deacons in 1556. The central portrait is that of Deacon Convener William Beattie. The right most portrait is that of King James IV of Scotland who decided that half the Town Council of Glasgow should be craftsmen. Below each portrait the Arms of the person is displayed. 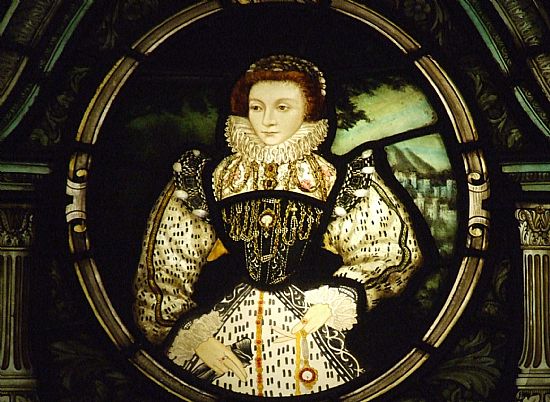 There is a great deal to see for which there is too limited space here to describe, but let's pick out the frieze in the Grand Hall. This was painted by Belgium artists shortly after the Boer War. We now know that the frieze was not complete when the Bonnetmakers and Dyers held their 306th anniversary in October 1903. The frieze depicts the fourteen Incorporated Crafts in a historical romanticized style and is 64 metres (210 feet) long.

The building grew through various stages and this becomes evident as you wander through it. Robert Adam, 1791-9, completed posthumously. David Hamilton extensions at rear 1838, interior recast by James Sellar in 1887-8 partially or totally refaced by John Keppie 1927; 1916 John Keppie redecorated the saloon. 1955 extensive alterations and new trades' hall ceiling by Walter Underwood.
http://www.tradeshousemuseum.org/saloon-stained-glass-window.html