A vacated church that was successfully put to new usage (well for a while) was St Andrew's Parish Church in Alexandria in the Vale of Leven, about half way between Dumbarton and Loch Lomond. The church was built in 1840. It has been described as being of Gothic style, but it is much too plain for that. Plainness does not necessarily mean boring. It is in fact a fine building. 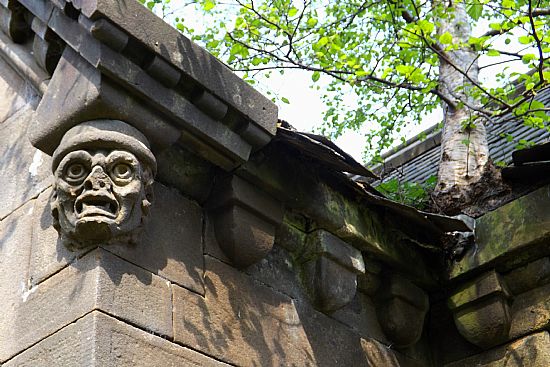 But it is the churchyard that I want to direct you too.

Along the back wall of the churchyard is a small intriguing building. This is the Smollett Mausoleum. The Smolletts were a notable family in this area. One of them, (although not directly relevant here), was Tobias Smollett a Scottish poet and author. He was best known for his picaresque novels, such as The Adventures of Roderick Random and The Adventures of Peregrine Pickle, which influenced later novelists such as Charles Dickens. The mausoleum though is more significant for its family connections.

It is described as of a style considered Romanesque Revival. It has a shallow T-layout and straddles the rear wall of the churchyard. It is built of honey-coloured sandstone ashlar; ashlar dressings; zoomorphic, figuartive sculptures. It has a simple gabled entrance bay, Romanesque door; chevron moulding; colonnettes; hoodmould, zoomorphic labelstops; plaque in gablehead; cross finial; grotesque figurative corbel. Narrow bays, recessed niches. Arcaded blind window; hoodmould, grotesque labelstops; very weathered on left return. Grey slate roof, ashlar ridging. That zoomorphic refernces notes those strange monkey faces that peer from the parapets. All that wordy description conjures up something very interesting, architecturally as well as through the family connection. 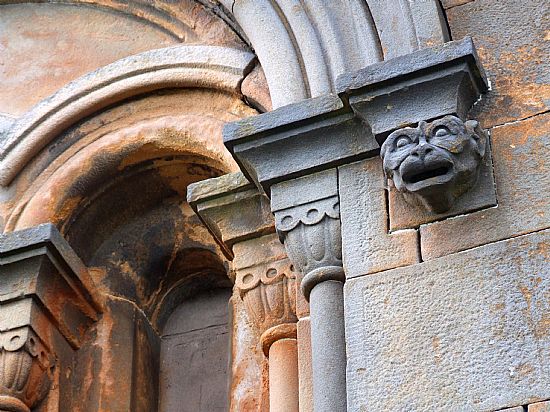 Yet it has for a long time been looking as though it is about to collapse. Trees sprout forth from its parapets, pushing apart those fine carvings. I have twice asked the council to attend to them. No action. While the grass may be cut, there appears to be a reticence to reach up, for that is all it takes, to saw off the offending growth. More than their job's worth? Anyway for these photographs I show what at first sight appears like a detail from an Inca ruin in a jungle and one of the monkeys on the side. The choice of imagery for a mausoleum is intriguing. While that does give a certain degree of Gothic to it they are not quite what one would expect of a family's last resting place.