When we speak of Glasgow Cathedral we usually mean this medieval building. There is of course also St Mary's Cathedral (The Cathedral Church of Saint Mary the Virgin : St Mary's Episcopal Cathedral) in the West End and St Andrew's Catholic Cathedral down on the Clyde. Those are amazing in their own ways, but Glasgow Cathedral of the Church of Scotland is the oldest and sits at the heart of where the city began alongside the Molendinar Burn. This is where St Mungo founded his church in the 6th century - even before this fine medieval building was built. 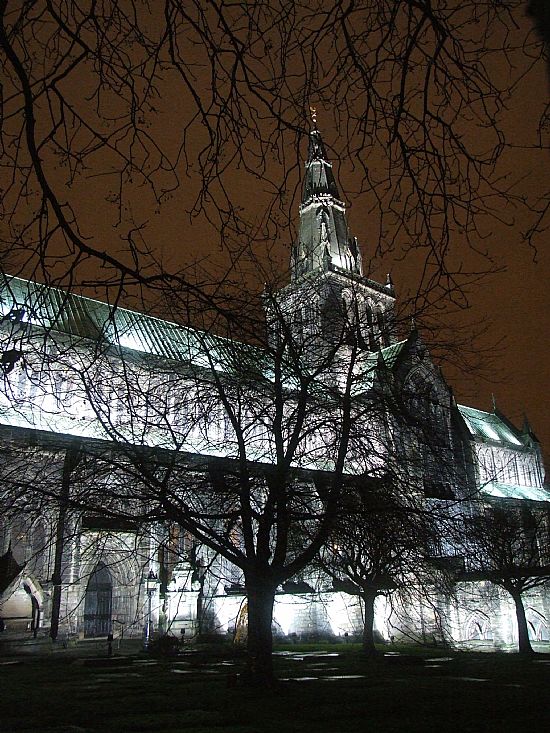 St Mungo had built his original church of timber. That was replaced by a stone one that was consecrated in the presence of King David in 1136. Fire largely destroyed it and it was replaced by another in 1197. Extensive rebuilding was done in the 13th century, but parts of that structure can still be made out in the current building. A tower was built at the crossing in the 15th century and two more added to the western corners of the nave. At about this time the Blacader (Blackadder) Aisle was built on where St Mungo's original church had been. In the 1800s major repairs were undertaken. This included the demolition of the two western towers with the intention of replacing them, but sufficient funds did not materialise and that didn't happen.

The cathedral has seen a great deal of history since then, but remains much as it was. As with many such ancient buildings it drips with atmosphere. When I took this photograph, I had been invited to visit it at night, an experience that seems to emphasise it even more. But during these dark nights the building is floodlit and this is what I show here.