When we think of Roman occupation of Scotland we think first of the Antonine Wall and probably how they didn't manage to really subdue much of the population. In reality, even though the Romans didn't stay very long, they did manage to get well up the eastern side of the country before retreating back to their Wall. They also had various strategic outposts elsewhere in the country and we find bathhouses in such places as Bearsden and Strathclyde Country Park. The water supply, waste drainage, steam heating and shared pit toilets, then unnecessary and mysterious to the local populations, are fascinating, but I have chosen this elegant small bridge in Strathclyde Country Park to represent early structural innovation. Even though it is known as a Roman Bridge we need to be cautious about such appellations. 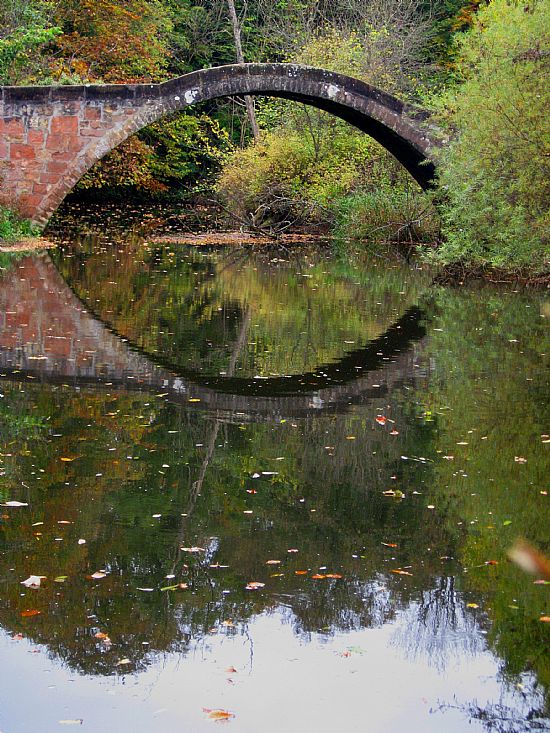 Canmore too uses this label as a Roman bridge, but also quotes various comments. General Roy, in 1793, does not mention the bridge although he must have been fully acquainted with it. Another reference to it considers that it may be medieval or later origin; no evidence of Roman work was found in it. And yet another states This small, hump-backed bridge, 14m long and 2.8m wide, has a modern cobbled surface. It is definitely not Roman, though it does appear to be very old, possibly medieval in origin. And it ends with : It is probable that this bridge was restored by James Hamilton in the late 17th century. While it may have originated as a medieval pack-horse bridge, a Roman bridge must have existed here or near here next to the Roman bathhouse, fort and road. (For sources see the Canmore link).

Local lore about ancient structures is not always accurate. But whatever it really is, it is certainly a simple, yet elegant structure.