Medieval Glasgow grew up along the routes between the Cathedral and the Clyde on what were to become the High Street to the Saltgait with its Saltmarket, by which name we know this street today. This roughly north/south axis was crossed by the Trongate westwards into the Merchant City and eastwards to the East End along the Gallowgate and London Road. At this Glasgow Cross stands the Tolbooth Steeple, the remains of the Tolbooth buildings built in 1625. This was naturally the best location for any business from very early times. 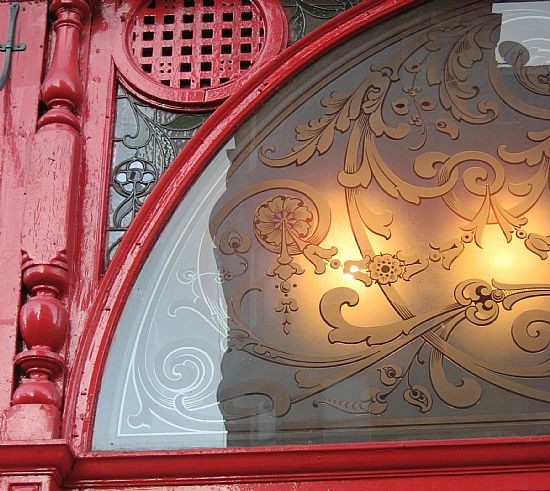 I have got to know this building from my frequent waits in heavy traffic. You may have other more direct reasons.

The Tolbooth Bar was designed as part of adjoining tenement block. We learn from the listing text that it was built for Caledonian Railway Co and including ventilation opening for railway tunnel below. Bar partially extended over ventilation opening by Cullen, Lochhead & Brown of Hamilton, 1909. the tenement itself is described as of a simplified Scots Baronial style with this single storey adjoining bar having elegant arched timber frontage with elaborate engraved glass.

It is a section of this arched window with etched glass that you see in my photograph.

It was previously called Coggan's Coat of Arms. Early photographs show that it then had an ornate doorway facing the intersection, but a great deal of the rest of the original façade remains. With the passing of time and changes, it is quite extraordinary to find original etched glass still intact.