The Buildings at Risk Register for Scotland notes that this building as a large, symmetrically planned French Gothic former academy of two storeys and attic with a square, central, 4-stage tower. Foundation Stone laid 23.6.1865. Damaged by fire 11.12.1882, and restored square, central, 4-stage tower. Originally, Thomas Gildard of Glasgow, architect, provided plans for the academy, described as "Greco Italian ... exceedingly chaste and elegant", but White (presumably Lord White) of Overtoun commissioned Melvin & Leiper to provide plans, and their design was adopted. But why was it on the Buildings at Risk Register in the first place? 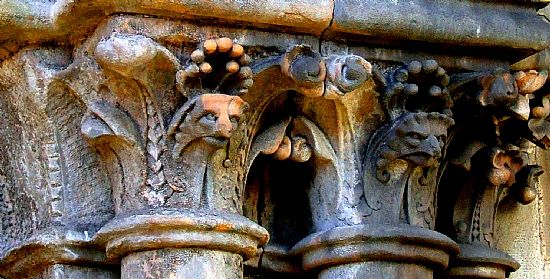 This “A” listed building had been designed by William Leiper, one of our most significant architects. The front façade is extremely richly embellished with carved figures and creatures. My first photograph depicts capitals that look like leafs morphing into gryphons and the second an angle clasping her hands in prayer but succumbing to severe weathering. The sandstone work is deteriorating after years of neglect. It became derelict in the later 20th century, having been damaged, again, by a fire in 1976. West Dunbartonshire Council proposed to demolish the building in 1994, but this was rejected. I also have photographs from that period, that shown below from 1987. 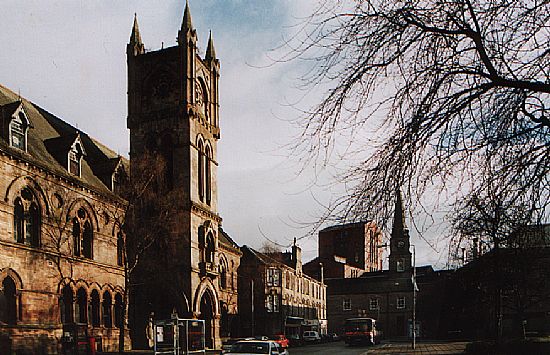 It was a fine looking building with a slated roof. Partial demolition eventually place in 2008 to remove unstable structures, retaining the front façades and side walls. I am never convinced that it is better to demolish any building of such stature instead of spending money on suitably stabilising it, but in this case the fire all those years ago had been the beginning of the end. Well it didn't quite end there. 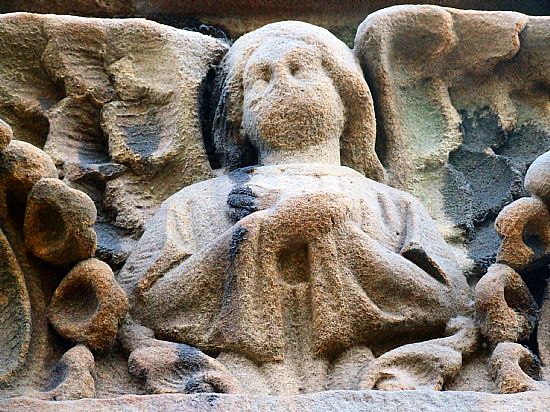 In October 2015, a grant of £500,000 was announced by Historic Environment Scotland to fund redevelopment of the building as part of a new headquarters for West Dunbartonshire Council and new modern council headquarters have been developed while retaining the orginal ornate front façade. It is hoped that the deterioration of the sandstone will be suitably arrested, but I understand that the budget does not cover restoration beyond that, for instance recreating these beautiful carvings. Having said that, the work on the old facade generally, including stonework, has been impressive and the new modern council offices stretching out behind it are sympathetically designed.

2018 and the restored Burgh Halls proudly forms the frontage and entrance to the new West Dunbartonshire Council offices. Very different styles from very different eras. The Burgh Halls section has undergone tremendous change which fortunately included a restoration and indentation of damaged stonework. This hasn't gone as far as the more ornate stone carvings, but perhaps another day with another budget. Inside the multi-volume atrium is flanked by open office space. The accommodation in the restored Burgh Halls section is a bit stark to my taste; the council chamber for instance appearing more as a large basic office so losing potential formality of setting. 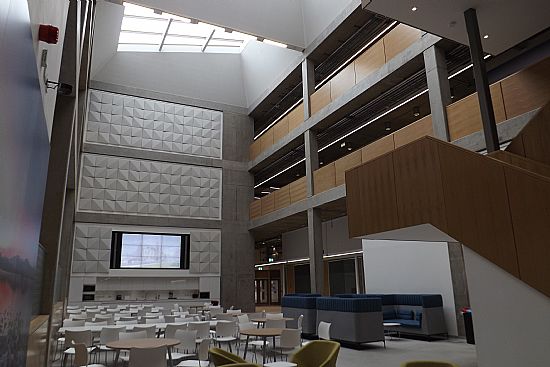 The influx of council staff in large numbers in turn will stimulate the picturesque, but struggling town centre. I am optimistic that this will also stimulate fresh interest in historic buildings elsewhere in the town centre too.