Sitting amongst trees above Lennoxtown is this impressive castle. Castle in this sense is a large elegant house. Well it was once elegant. It is now a ruin. It is fenced although there is a gap in the palisading. I entered it and climbed over fallen rubble much as many others evidently have done too. But I took a risk. Judging from the track through the rubble and a precarious rope swing, children have been playing here. I have an educated ability to judge the stability of such buildings and I would not go very far. Even an educated assessment remains somewhat of a guess as to when and how further collapse will occur. This is a very precarious building and could crumble further from water ingress or inclement weather or simply from time and decay. This is life threatening. Anyone wishing to visit this building should stay beyond the security fence. There is plenty to see from there. 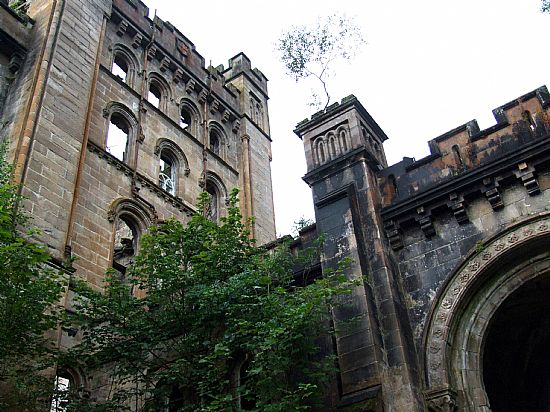 This is nevertheless a building that should be appreciated for its architecture and its place in local history. It was designed by architect David Hamilton between 1837 and 1841 and had subsequent additions. It is “A” listed.

The Buildings at Risk Register notes :

Large 3 storey red sandstone mansion built in Norman castle style. The walls are castellated and battlemented, and an imposing porte-cochere frames the northern entrance. 4 storey pavilions stand at each corner and, along with the 5 storey tower, display decorative embattled parapets. A profusion of round-headed windows with dripmoulds and glazing bars adorns the facade. Pitched, slated roofs are concealed behind crenellated parapets. An enclosed courtyard lies to the west side. The interior features some fine plasterwork, timber mouldings, shutters, and other decorative features.

In April 1925 Glasgow Parish Council resolved to build a new Mental Deficiency Institution under the provisions of the 1913 Act. In 1927 the castle and its estate were purchased and plans drawn up for what was intended to be the largest and best equipped hospital of its type in Britain.

Providing 1,200 beds at the cost of £1.25m, work began converting the estate to the designs of Wylie, Shanks and Wylie. Lennox Castle itself was adapted into a nurses home. Later requisitioned under the Emergency Hospital Scheme, with ward huts constructed near the Castle, during WW2. A maternity unit was subsequently established on the site in 1941 which operated until 1964. (H.Richardson) In 1987, the castle, previously used for nurses' accommodation, was vacated. 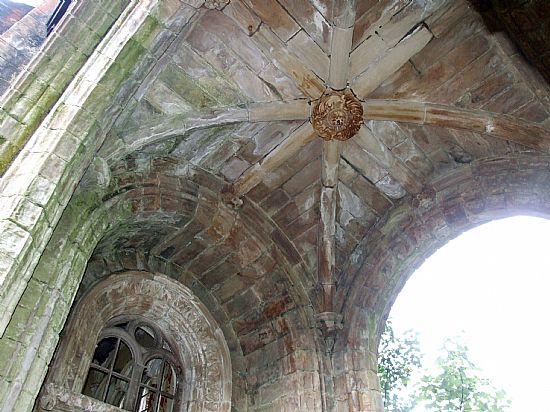 Adaptation of such buildings is unfortunately never straight forward as sustainability, appropriate use (particularly as needs and standards change) and costs add to the challenges. That steel structure that today perilously leans over the now open central space and from which a rope swing now dangles, is probably from the time that access and exit links were added over the original stonework. Note the references to richness of detail such as that of the interior that is now completely gone. A few collapsed round-headed windows now hint at the quality.

The Buildings at Risk Register then goes on to document attempts to utilise the building or the site, slipping obligations to repair and the ultimate demise of this once fine building. 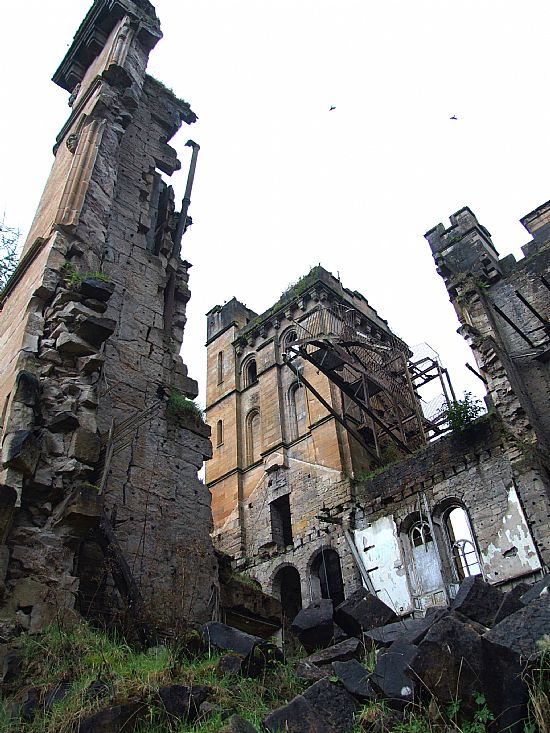 I don't know the eventual fate of this building. It still looks out over the trees and Lennoxtown with some dignified authority. My attention was drawn to it because of contact by the Lennox Clan with regards to their website. The Lennox name and designation also apply to a wide area with historical significance. Such a building provides a focus of interest and a point from which other facets can be researched and linked. It is therefore of great importance to a large number of people and needs protection.