Glasgow has three cathedrals. This one, St Andrew's Cathedral sits in Clyde Street right across form the Clyde itself. It is in many ways less imposing and unprepossessing than the others. It lacks the gargoyles and saints staring out at you as so many other older cathedrals do. Although richly decorated, it is comparatively modest in form and adornment. This modesty is a reflection of its re-establishing itself after a history of persecution. It almost looks Protestant. But it is in fact Catholic – in a Protestant country. It was designed by architect James Gillespie Graham of Edinburgh. The foundation stone was laid in 1814 and Holy Mass was celebrated for the first time within its walls two years later. 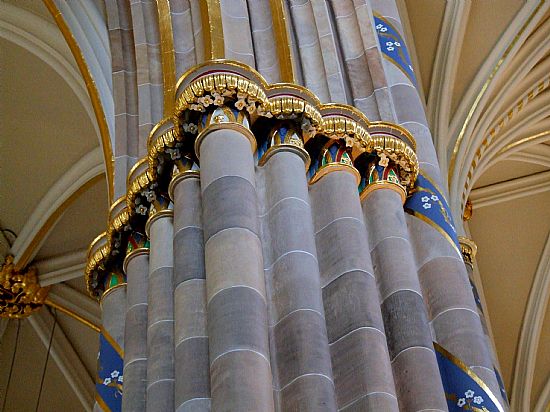 For the first two centuries after the Reformation there was practically no Catholic presence in Glasgow, but by the end of the 18th century Glasgow's industrial expansion was attracting many Catholic workers from Ireland and parts of the Scottish Highlands. Scotland ’s Catholic Hierarchy was restored in 1878, and Charles Eyre was named the first post-Reformation Archbishop of Glasgow. In 1884 the Chapter of Canons was re-erected and subsequently St. Andrew's became the Cathedral of the re-established Archdiocese. In 1947, with the establishment of the new Dioceses of Motherwell and Paisley, the Archdiocese of Glasgow recovered the metropolitan status which it had had before the Reformation and St. Andrew's became a Metropolitan Cathedral.

For all the comparative “modesty”, it is still a very beautiful building. The calm cheerful interior is one of my favourites. It was recently restored and is a firm favourite to visit on Doors Open Days. The first photograph depicts one of the columns, recently restored, painted and gilded. 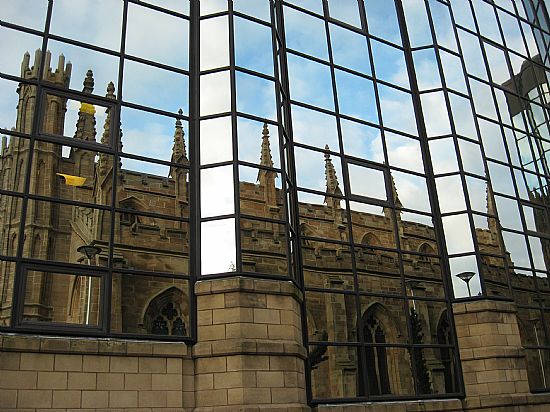 Next to it stands the very modern administrative building, reflecting this one. It is modern and shiny and reflects the cathedral. At pavement level one finds acknowledgement in stone of the cathedral materials and form. Above this is a fairly standard modernist structure. While I often bemoan the grids of glass as interventions amongst the more richly designed older buildings, I nevertheless finding myself reaching for my camera to capture the intermingling of forms in the reflective glass. It is almost as if the newer building design is played down and instead depends on the older one opposite for its design interest. Sometimes it appears as a cop-out or even an affront. This one though, I feel is very successful. It allows the cathedral itself to retain centre stage and absorbs and returns the ornateness of the stonework. The modern interventions don't stop there. Besides some internal artwork there is the extremely modern and reflective Cloister Garden on the other side. I am not sure if that works. Depending on the weather and lighting conditions one experiences it in, it can look very drab – or wonderful.

To the other side is the very modern Cloister Garden. I find the modernity rather abrupt. The garden enclosing wall, although of sandstone, looks very out of place. Within the garden though, if the lighting is right, the mirror forms and water provide a degree of quiet dignity. I wish though that the pure gentle joy of the interior had spilled out here too.