Roseberry Hall, South Queensferry, and the Forth Rail Bridge.

Some years ago, I was doing some survey work on Rosebery Hall in South Queensferry and got to know this small Firth of Forth port quite well. Rosebery Hall stands on a terrace above the road. This “A” listed old building was known as the Tolbooth. Behind it was the actual Rosebery Hall, by which name most people now know the whole building. 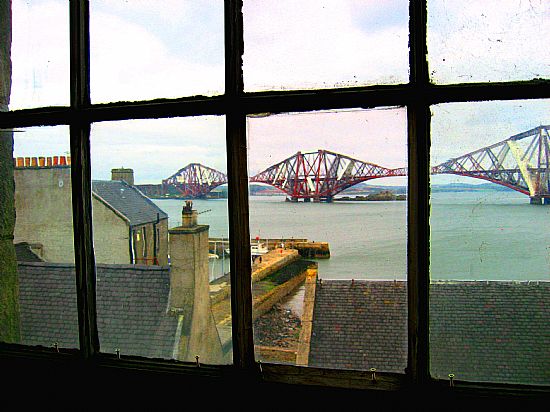 The tolbooth of a medieval burgh was an office where taxes and customs were collected. By the 16th century it was not unusual for the tollbooth also to have become the burgh court house, the prison and the meeting place of the burgh council. The earliest part of Queensferrry Tollbooth may date from the late 16th and early 17th century.
In 1644 there is a reference to the Tolbooth's other function, as a prison when a suspected witch, Margaret Young was imprisoned there. Prison accommodation probably occupied the Easter Laigh House.

Such information, casually recorded, makes plain the fact that the tower or steeple was supported on four stone pillars. This fact explains why it was possible in 1641 to house a weighing machine under the Tolbooth. In the minute of council 25th November 1641 it is stated, " The council understanding that the benifit arising by the weightis and metts is proffitable, therefor they desyne allot and appoynt the westre large house undre ye tolbuthe to be ane weynge of merchan guids metting of meall".

From this description, we better understand the way the building is entered at different levels from the terraces. There is a throughway below the tower at the middle level.

My photograph was taken through the cobwebs of a room up the tower. In the near distance can be seen the small port. In the further distance is the famous Forth Rail Bridge. The bridge too is listed “A”. It is considered a Victorian icon of engineering and has been in operation since 1890. It was designed by Sir John Fowler and Sir Benjamin Baker

At one level buildings form a cohesive and interactive towscape. At another they may interrelate to other features across a landscape. The Roseberry Hall tower would have been a welcome marker to ships returning to the small port below. For a long time the distant view of the Forth Rail Bridge has been a tangible reminder for many residents of the wider world out there at a different pace and destination.