Victoria Street is the counterfoil to the Royal Mile running up the volcanic plug the castle above. It is the surviving low-lying part of medieval Edinburgh just below the urban congestion higher up. And it is because of this that it combines the intimate scale of 4 or more storeys with further taller buildings on their shoulders. Juxtaposition of scale and height is explained when one realises that most of this depends on the buildings, to one side at least, what appears to be taller buildings standing on the shoulders of those lower down, are in fact climbing up the hillside and a walkway passes over the roof of the lower ones; below the higher ones. 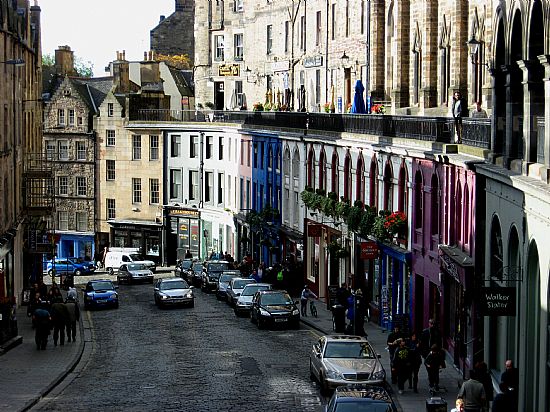 Many of the buildings are very old although some modernity squeezes in too, with some degree of environmental success. If you explore the various closes and courts along the Lawnmarket or Royal Mile or perhaps Johnston Terrace where it sweeps up to meet them, you will appreciate the steepness on the north side which is less evident on the south side, this side. That is because they probably stop short, as with Riddles Court, with the buildings they serve overlooking the raised walkway and Victoria Street.

So what you see in my photograph are circulation routes at various levels. As the walkway comes to the end it ducks up Upper Bow to the Lawnmarket.

Victoria Street was built between 1829-34 as part of a series of improvements to the Old Town, with the aim of improving access around the city. It was designed by architect Thomas Hamilton, one of the leading lights in transforming the city with neo-classical buildings and much influenced by the architecture of ancient Greece. However it was stipulated that the buildings associated with the new street should be ‘Old Flemish’ in style, and draw inspiration from the details on Heriot’s Hospital....On the north side of the street a terrace was built, with a series of arches underneath which were later filled with shops. Undoubtedly the most famous business in the street was Robert Cresser’s brush shop, first established in 1873 .

I love the simple curve and the changes of level, the scale and the sense of history. Although it is in fact a very popular place, it gives the impression of an Edinburgh just discovered, an alternative to the bustle just above it.