The Hub is the epicentre of the Edinburgh International Festival. And it looks it. The terrace outside in good weather is full of tourists and festival goers with refreshments in their hands. Inside there are several activity spaces for dinners, weddings, conferences and other events. This is the main auditorium, boldly coloured in geometric shapes that speak of the future in art, but seem reminiscent of past arts and crafts style. But if it has a certain feel of a church, this is no coincidence. 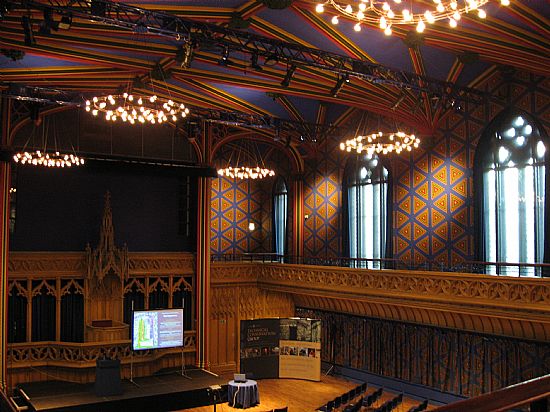 This is an “A” listed building. Sitting at the upper end of the Royal Mile near the castle, it has been an integral part of the architectural fabric of Edinburgh for quite some time; its spire the highest point in central Edinburgh.

It was constructed between 1842 and 1845, as the Victoria Hall, to house the General Assembly of the Church of Scotland. The architects were James Gillespie Graham and Augustus Welby Pugin. Curiously the building was never consecrated as a Church. In 1929 the Church of Scotland ceased to use the building and it became a temporary home for a variety of congregations. It was named the Highland Tolbooth St John’s Church in 1956, before falling into disuse in the 1980s.

This is a great example of a church building being turned to an alternative use. It re-opened in 1999 as Edinburgh's Festival Centre.