The Forth and Clyde and Union Canals that had for so long been the main artery of central Scotland's industry and commerce, fell into disrepair, outdone by the railway network and ships that could more easily circumnavigate around the coast. The Forth and Clyde Canal had been designed by engineer, John Smeaton from 1763 and opened in 1790. The Union Canal was built to link with it between 1818 and 1822. 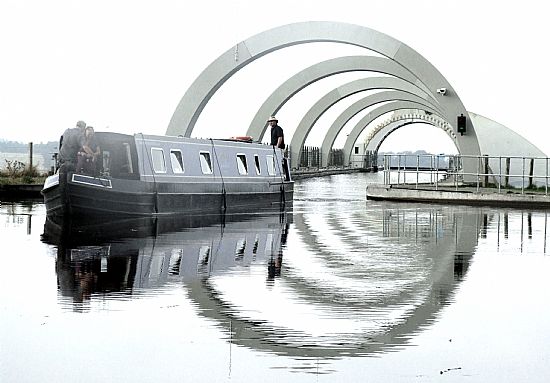 The canals were only formally closed in 1963, but by that time saw little traffic. Some sections were infilled; others simply silted up or were cluttered with discarded debris. But as the millennium approached, interest for its restoration was fuelled by a realisation of what it could be for recreation and as the nucleus of a pleasant environment again. Funds were raised and the extensive project was begun. By this time though, several sections had been built over. Innovative new solutions were needed. It was not always possible to simply divert the canal. Here in Falkirk, the problem was to find a way to raise the canal and the craft that plied it between levels previously served by several locks.

Planners decided to create a dramatic 21st-century landmark structure to reconnect the canals, instead of simply recreating the historic lock flight. The wheel raises boats by 24 metres (79ft), but the Union Canal is still 11 metres (36ft) higher than the aqueduct which meets the wheel. Boats must also pass through a pair of locks between the top of the wheel and the Union Canal. The Falkirk Wheel is the only rotating boat lift of its kind in the world, and one of two working boat lifts in the United Kingdom,

By now everyone will be very familiar with the Wheel. I have chosen this view of a boat that has just left the wheel and is about to proceed along the canal at the upper level. The calmness of the scene belies the quiet drama of the lift of 24 metres it has just experienced. Beyond those simple elegant bracing arches is empty space.