This pantiled mustard coloured building is The Palace, sometimes called The Colonel's Close or Bessie Bar Hall (by which name it is listed). It is actually a large house, a malt house. 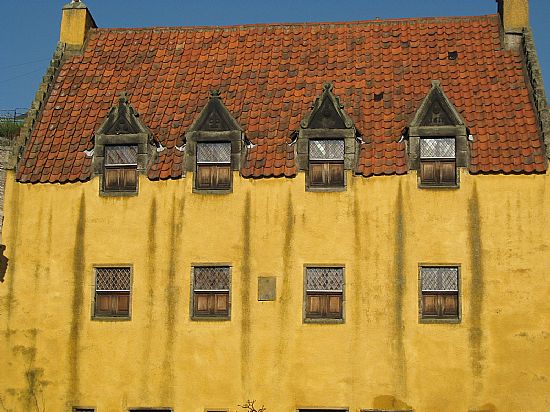 Canmore tells us that Culross Palace was built between 1597 and 1611 as the town mansion of George Bruce (later Sir George) of Culross, later of Carnock. Bruce, the third son of Edward Bruce of Blairhall, acquired a fortune about this time from his interests in commerce, coal mining and salt manufacture. The house was built in stages but, after its completion, remained comparatively unaltered. The title 'Palace' is somewhat pretentious but it is described in the title-deeds as 'the Palace of Great Lodging in the Sand Haven of Culross'. The layout of the house is difficult to understand when considered in relation to the present courtyard but the site appears to have been purchased piecemeal, as ground became available, and the house and courtyard developed accordingly. The detached north range of domestic accommodation over a byre-stable is difficult to interpret, particularly since it has the same high quality painted decoration as the main house, yet lacks kitchen accommodation. The house on the other hand has the remains of a kitchen at the east end of the 1597 range and a kitchen and bakehouse in the vaulted north range. Perhaps the north range was an independent house, with a detached kitchen or a kitchen in the basement, purchased by Bruce and converted to his requirements.

While Canmore refers to the earlier date as above, the listing text notes that it dates from 1776. This could be explained by the current form taking place at this time.

The building stood empty for some time, but is now restored and open for visitors thanks to the National Trust of Scotland. And if you do visit, make sure to also see the kitchen garden at the back complete with happy chickens.