What you see in my photograph is the courtyard formed where the building turns from along the contours of the Mound to up towards the Lawnmarket and Edinburgh Castle. It is in fact a single complex although it appears to be a jostling group of tall medieval buildings. Most people will have noticed it up on the hill from below across Princes Street Gardens or perhaps on reaching the Castle's Esplanade. 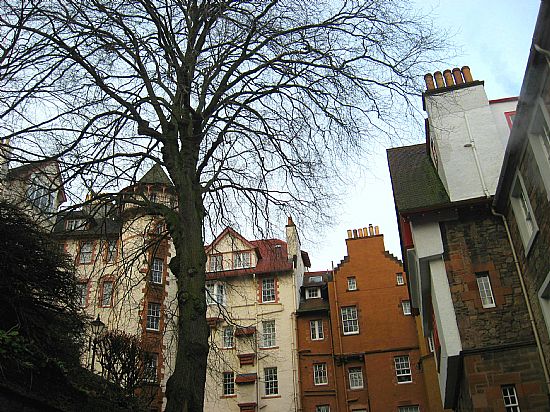 Ramsay Garden is a block of sixteen residential units developed around Ramsay Lodge. Ramsay Lodge, also known as “Goose Pie House”, is an octagonal house built in 1733 for the poet and wigmaker Allan Ramsay the Elder. Alongside it were built a row of Georgian houses in 1760, now forming part of the courtyard.

The tight mix of housing, trades, shops, inns and other buildings packed over the limited space on the Royal Mile and Lawnmarket and spilling over over the edges became a terrible slum and triggered the building of the New Town with its elegant houses and layout to the north. At such times there would have been a tendency to leave this area to its fate. But in the 1890's one man, Patrick Geddes, had recognised its richness and potential. Geddes was to become known as a visionary and as the father of modern town planning. He dreamt of a return to the city's 18th century Golden Age when many great thinkers lived and met in this area.

Geddes was a man of his time : a biologist, botanist and urban planner (amongst other things). It is interesting to contemplate how each of these interests influenced the other. Professor Geddes as he was by then, purchased the property from Lord Murray of Henderland, a descendant of Ramsay, in 1890. The complex which Geddes built, incorporating Ramsay Lodge and the plain 18th century tenement to the E (Nos 1-3 Ramsay Garden), and designed by S Henbest Capper and Sydney Mitchell and Wilson, was an extension of his University Hall, begun in 1883 at 2 Mound Place. It has been pointed out that the intention was to provide practical housing for undergraduates on tight budgets while creating a collegiate environment.

I find it interesting how some interventions, even contrasting ones such as this, can become well integrated into the townscape. Time helps, but I think the main attributes are of scale and material. Scale is not necessarily of overall size, but of details to which we can relate. And the materials are obviously worked by hand. Modern interventions so often miss this, becoming instead impersonal and an affront to what is around them.