Glasgow's Buchanan Street is lined from top to bottom with great architecture of many guises. As a pedestrianised concourse it is pure theatre with the promenading public and the buskers and the shoulder to shoulder façades certainly meet such expectations too. I have often enjoyed taking photographs of these features and found this one particularly interesting. It was only later that I realised that 179 Buchanan Street was in fact the Athenaeum Theatre. A great interposing of performance in the street meeting performance on the stage inside. 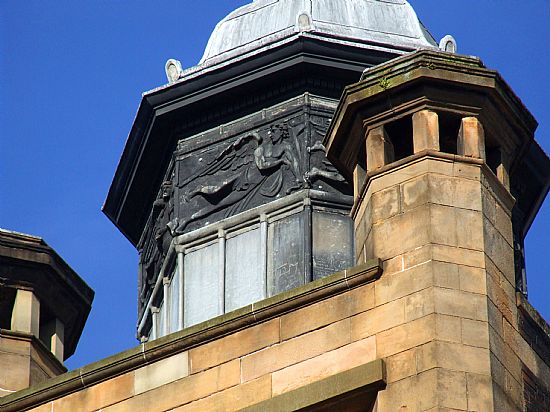 This “A listed building was designed by Sir J J Burnet and J A Campbell in 1891-3. It is rather surprising to find a theatre within such a narrow edifice. Developing structural technology was freeing up architectural options. This tall narrow arrangement was considered a pioneer of the “elevator style”. It was purpose-built to train drama students and besides a theatre contained a billiard room, dining room and gymnasium.

There is much to catch the eye in the design of the façade, but look up beyond the eclectic Victorian features of sandstone until your gaze comes to the roofscape. There you will find the “Tower of the Winds” cupola as depicted in my photograph. These little seen relief friezes in lead work across an octagonal tower cupola are of winged figures. While reminiscent of Greek mythology they are more an arts and crafts interpretation.