Tenements are a form of block of flats with shared entrances and flights of stairs to those above each other. Although found elsewhere too, the term and form in sandstone and the usual bay window is very typical of Scottish cities such as Glasgow. Here we find a large block stretching down the lower end of Margaret Street and along the Esplanade in Greenock. There are bay windows from which to view ships plying the the Firth of Clyde. Residents in the corner flats have the good fortune to have views of 270 degrees, the windows rising almost as a turret and topped with a sharply pitched conical roof in turn crowned with, well, a crown of wrought iron. This red sandstone tenement block is known as Sandringham Terrace and was built in about 1900. While it is within the Greenock West End Conservation Area, it does not appear to be listed, which is strange as it is quite exceptional. 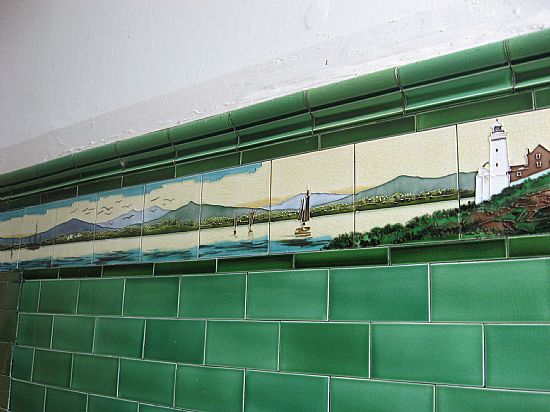 But I want to draw your attention to a unique feature in one of the closes. All the entrances to the closes and stairways have colourful ceramic tiles. But one is more ornate than the others. It is in fact a great work of art. This one depicts the local environment in a band of glazed ceramic tiles, the hillside vegetation, cottages, a lighthouse and passing ships and other craft. Even the hills across the Clyde are beautifully shown. The tiles were evidently produced by the Glasgow company, James Duncan Ltd of Glasgow. The blog from which this information is taken also gives a link to a paper on the subject and I have noted it below as well.